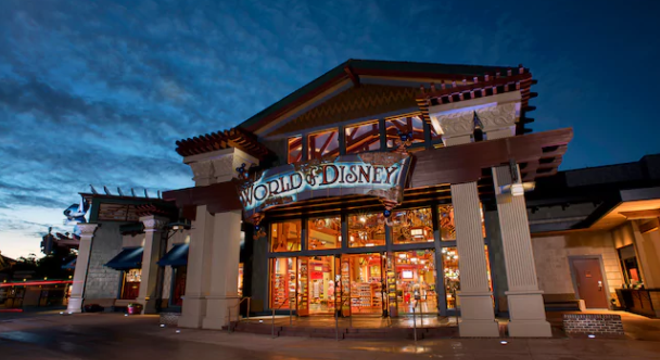 Since 1996, the World of Disney shop at what is now known as Disney Springs has been enchanting customers with over-the-top theming and room after room of Disney merchandise.

The 50,000-square-foot is the world’s largest World of Disney, which also has locations in Times Square, Anaheim and Shanghai. With a 2015 expansion that added another 6,000 square feet, the flagship World of Disney is also the world’s largest store to sell Disney merchandise. A 51,000-square-foot Disney store in Shanghai clocks in at a close second.

The 2015 expansion kept the same American Craftsman–meets–Michael Graves aesthetic of the original design and added new entrances. The Bibbidi Bobbidi Boutique got an in-store update as part of the addition as well.

Now WDWMagic.com is reporting that the entire store will receive a major overhaul that will take the majority of this year. An empty store in nearby the Town Center section of Disney Springs will become a small pop-up store during the remodel.

The entire World of Disney store won’t close. Instead, the remodel will close half of the store at a time. The bad news is the remodel seems to be also removing the unique theming that is the signature of this World of Disney. WDWThemeParks.com notes, “The refurbishment is expected to remove a significant amount of theming from the store in order to facilitate changes to product and floor plans.”

The store currently has highly themed sections devoted to Pirates of the Caribbean, the Disney Princesses and the Fab Five, along with less themed but still site-specific areas for a number of Disney brands.

This will be the first major overhaul of the store. It’ll likely include a number of improvements to things like lighting and outside signage, which has become rather dated over the past 20-plus years.

The remodel is possibly part of a larger update. Rumors have pointed to major updates coming to the Marketplace, including the nearby Rainforest Café removing its fire-breathing volcano. The larger-than-life props that fill the World of Disney both inside and out are in stark contrast to the higher-end luxury feel of Disney Springs. The water-squirting Stitch, the animatronic pirates, and the rope light-wrapped hot air balloon props will all likely go the way of Pleasure Island as part of Disney’s attempt to draw in the Millenia mall crowd.

The fully updated store should debut by the holiday season. No word on whether the walk-up-only Starbucks, which was built onto the side of the World of Disney and shares a uniform design theme, will be affected by the remodeling.

The Gist disney world of disney