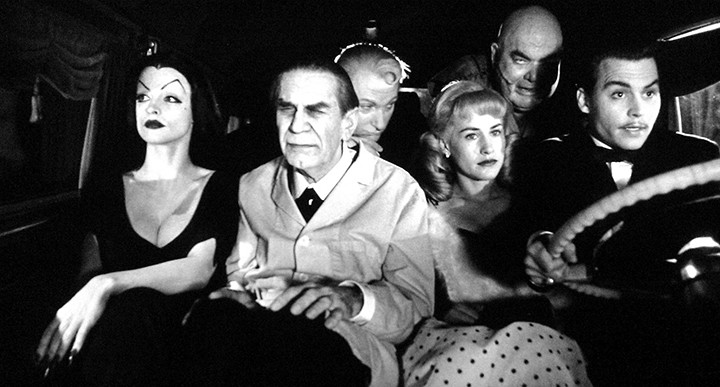 1994’s Ed Wood, a rollicking cinematic love note to the up-to-that-point reviled and forgotten filmmaker, is not only the fullest flowering of the Johnny Depp–Tim Burton creative symbiosis, but Burton’s finest film. Period. Some may argue that point, but some have also argued erroneously that Wood’s 1959 opus Plan 9 From Outer Space is unwatchable, so whatever. Focusing on the uproariously on-the-fly filming of Wood’s misunderstood science fiction masterpiece, Plan 9, the movie is by turns hilarious, tender and downright inspiring. Why this film succeeds so wondrously comes largely down to the unbelievable ensemble cast, a mix of big-timers and the usual Burton regulars. Johnny Depp as a scenery-chewing Wood and Martin Landau as Bela Lugosi are revelatory, and their friendship forms the heart of the film, but a then-ascendant Bill Murray as Bunny Breckinridge, George “the Animal” Steele as Tor Johnson and Lisa Marie straight-up channeling Vampira make the film absolutely essential watching. The film’s subtle messaging about the importance of DIY creativity and the lifeline that is falling in with a bunch of likeminded outsiders who support each other and you, make this an increasingly timely piece of work.