With a congress of experimental musicians like this convening in the upstairs theater room, it was already a spectacle before anyone even took the stage. Just the instruments – across four distinct stations – were a show unto themselves, the wares of some alien orchestra. 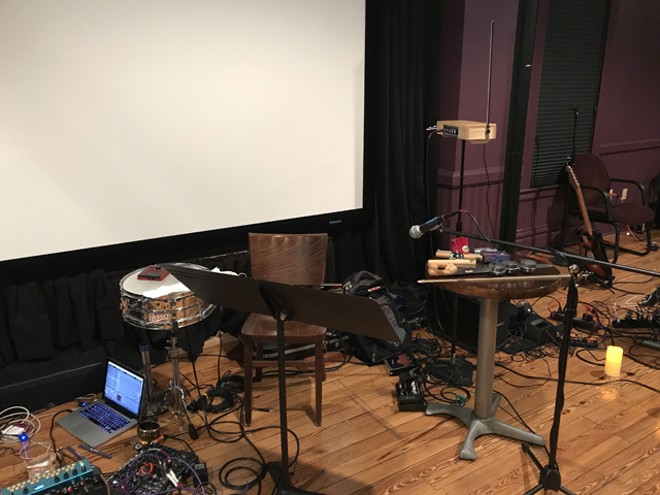 I wrote about progressive music duo Baker-Barganier Duo last summer when they performed at the home-turned-art-space Guava Tree Gallery. The St. Pete pair of toy-piano champion Elizabeth Baker and multi-instrumentalist Erich Barganier return this time on proper tour for their new album (... and darkness was upon the face of the deep). 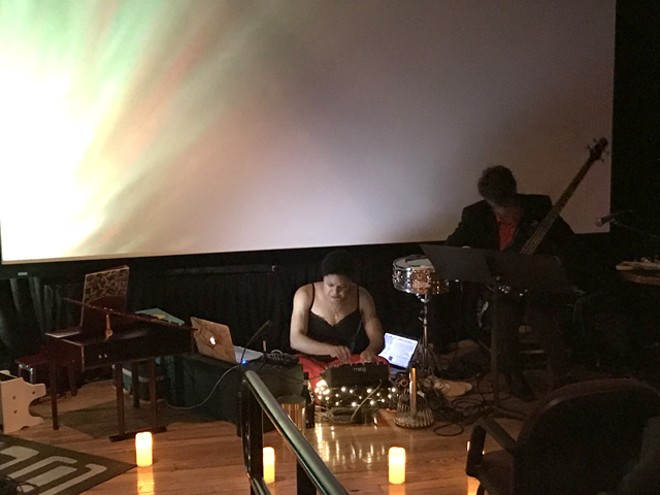 It’s clear that much has crystallized between them and their material since their debut here last July because this performance rang with much more clarity and cohesion. The essence of the slave songs that inspired the work was notably more palpable, better underscoring the considerable distance that this duo carried their spirit. They also tested some new material, some even featuring surprisingly familiar pop-music vernacular like samples and bass-thick hip-hop beats.

Also featured on the bill – and also intriguing – was Preston Beebe, a Montreal composer whose explorations merge percussion and technology. For his performance, he requested the house lights off. With just the trace light from his gear as the only beacon, his methods and tools were made even more inscrutable in their dance. The only thing that the listener is left to examine is the pure sensation. 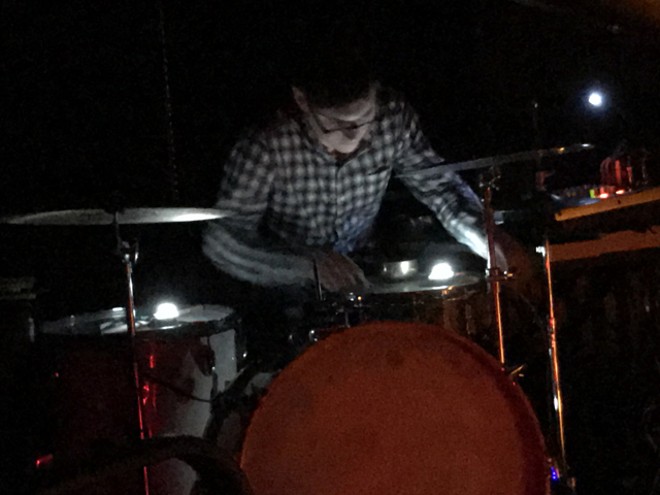 Beebe’s sounds weren’t so much music as they were a sonic dimension, an interplay of drone, noise, percussion and space. Its central pulse began as a light metallic vibration, which was sustained until it became a humming engine. By the climax, through its relentless persistence, it came on like a buzz saw. When you experience that in a room of near-total darkness, it’s not something you simply hear, it’s something you feel. 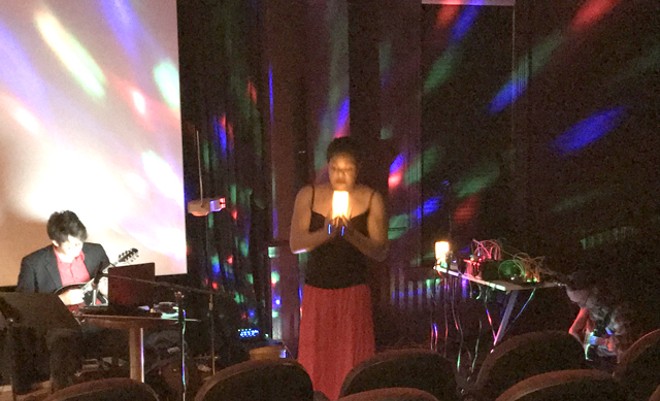 The program concluded with a collaboration between Baker, Barganier and local experimental musician Steven Head, whom I just gave an Undie Award for “Best Guitars.” Despite – or maybe especially befitting – that honor, Head’s contribution here was both an extreme expansion and furtherance of what a guitar performance typically means. Musically, the frequency of this this trio was much more in line with Head’s solo White Sands project. 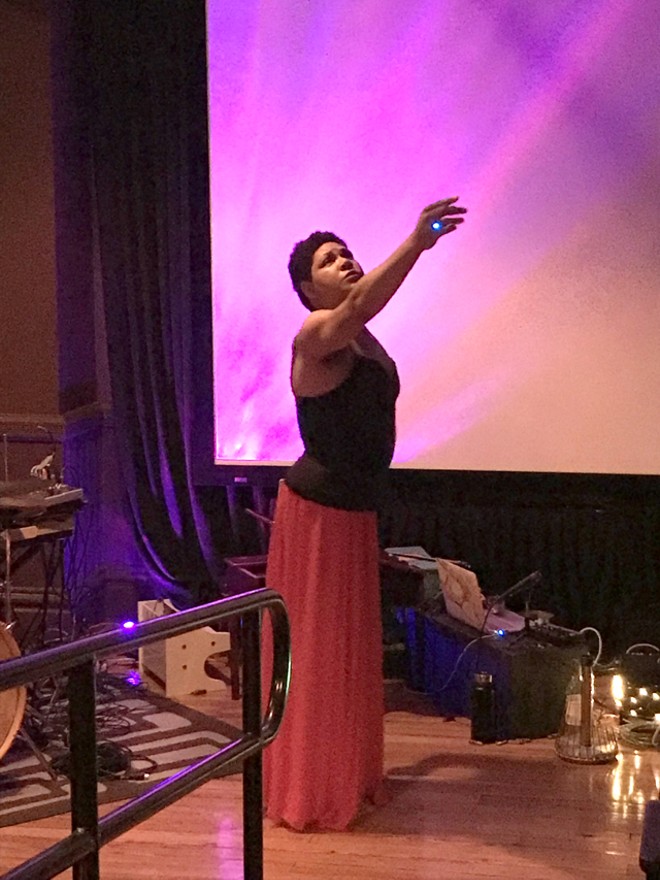 Baker’s role was, interestingly, a strictly physical one that saw her moving out from behind her signature instruments and expressing through interpretive dance that at times was even interactive with the audience. 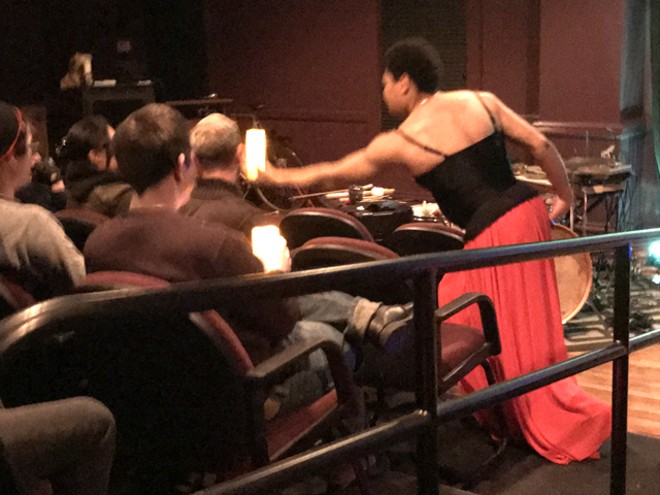 Between Barganier’s twinkling instrumental work, Head’s tidal washes and Baker’s movements, it was a dimensional audiovisual experience that made the room move like an underwater ballet. 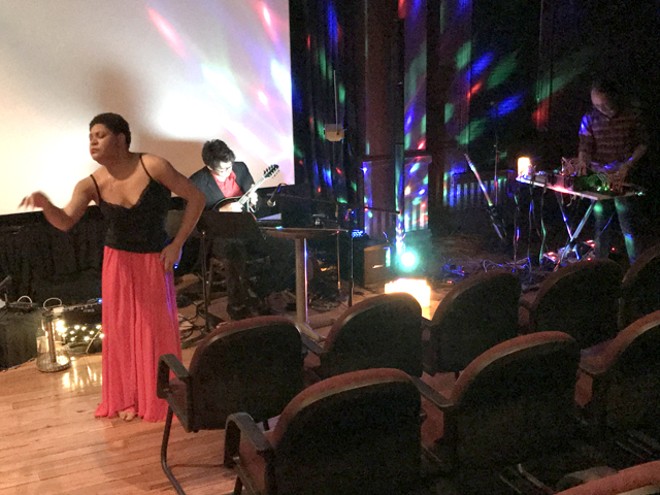