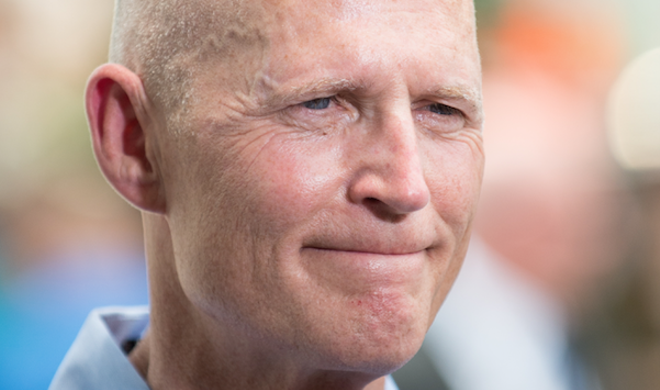 At least that's what the Trump administration wants you to believe.

Yes, the same Rick Scott who reportedly banned the word "climate change" in state offices as Miami drowns, weakened Florida's environmental protections and perpetually resides in the pockets of Big Sugar and other pollutant industries even as Florida's coastlines teemed with guacamole goop. The same Republican governor who, for a hot second, said he supported drilling in the Everglades and advocated for offshore oil drilling even after the Deepwater Horizon oil rig explosion as long as Florida's beaches were protected.

Bless your heart, governor, if you thought you could pull a fast one on Floridians. We know you're running for U.S. Senate this year against Democratic incumbent Bill Nelson and can't afford a shit show that big.

I have spent my entire life fighting to keep oil rigs away from our coasts. This is a political stunt orchestrated by the Trump administration to help Rick Scott who has wanted to drill off Florida's coast his entire career. We shouldn’t be playing politics with the future of FL. https://t.co/xJoat2m9az


In a statement, Zinke credited Scott with the decision to remove Florida from the Trump administration's oil drilling proposal in protected parts of the Atlantic Ocean and eastern Gulf of Mexico after the governor and pretty much every politician in Florida condemned the move. The deal was apparently not offered to other coastal states.

"I have witnessed Governor Scott's leadership through hurricane season and am working closely with him on Everglades restoration," Zinke said in a statement. "He is a straightforward leader that can be trusted. President Trump has directed me to rebuild our offshore oil and gas program in a manner that supports our national energy policy and also takes into consideration the local and state voice. I support the governor's position that Florida is unique and its coasts are heavily reliant on tourism as an economic driver."

After a last-minute appearance with Zinke Tuesday at a Tallahassee airport, Scott thanked the secretary for addressing his concerns about oil drilling.

"By removing Florida from consideration, we can now focus on how we can further protect our environment, including our proposal for record funding for the Everglades, our springs, our beaches and our state parks," Scott said in a statement. "I will never stop fighting for Florida’s environment and our pristine coastline."

Bless your heart again, governor, for being another one of Florida's great election-year environmentalists.