The Villages will soon have an autonomous taxi service 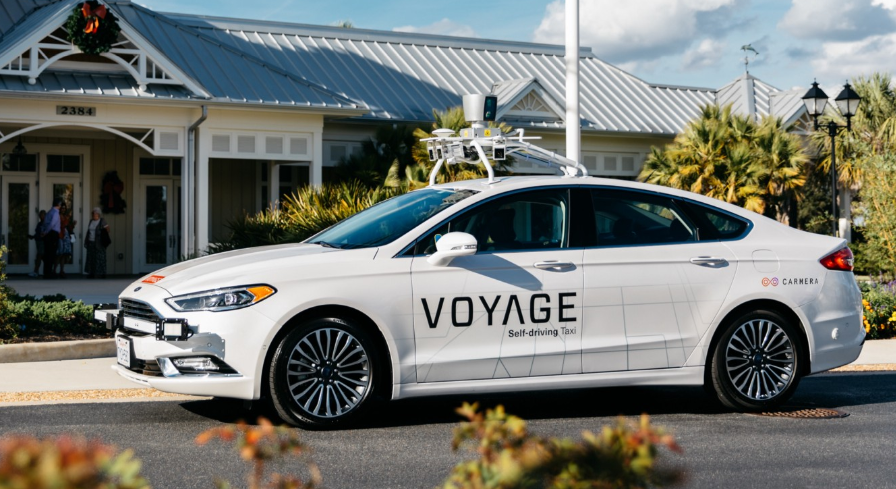 At 32 square miles, 750 miles of road, and 125,000 residents, The Villages clock in as one of the largest retirement communities in the world.

The development, which began in the 1980s as a typical mobile home park, now has three downtowns, thirty-eight golf courses, and a reputation for drunken debauchery. Mix all the booze that led to that reputation then factor in the that the average age in The Villages is in the low 60s and it's easy to see what such a community would be ripe for the self-driving car revolution.

Last week, Voyage announced that it was partnering with The Villages to roll out what will be the "largest by area size" autonomous vehicle (AV) taxi service in the world.

The community is mostly made up of a private road network which is ideal for testing the emerging technology. Florida does have some of the friendliest laws for self-driving cars in the country thanks in large part to Jeff Brandes, a Republican State Senator who represents Pinellas County. In 2012, Google brought two of its early self-driving cars to Tallahassee to showcase the technology after Brandes requested the meeting. Since then, Brandes has become even more of an advocate of the technology, often pointing how the technology could benefit Florida’s 3.3 million senior citizens.

By 2016, Florida was fighting to become one of the nation’s leading states for AV technology. In a vote that garnered not a single no vote, Tallahassee approved a law to allow fully autonomous vehicles (AV) on public roads without a human driver behind the wheel, a first in the nation.

Unfortunately, that same year Florida made AV history again, this time for all the wrong reasons. Joshua Brown became the first death in a crash involving a partly autonomous vehicle. Brown had the Tesla in autopilot mode, which requires the driver to leave their hands on the steering wheel but has the car actually driving itself. Internal records recovered from the accident showed that Brown had ignored more than a half a dozen warnings before the crash which involved the car’s top third to ripped off as it crossed underneath a tractor-trailer. The NTSB published a 538-page report about the accident but drew no conclusions on what caused it. Both the NTSB and the NHTSA have done research into Tesla’s Autopilot program with neither finding any defects. Tesla updated Autopilot afterward, now having it automatically turn off if a driver removes their hands from the steering wheel for an extended time period.

Last year the state took yet another significant step forward in becoming the AV capital of the country when the Florida Department of Transportation laid out plans for a $90 million, 400-acre AV test facility, known as SunTrax, near Florida Polytechnic University in Polk County. SunTrax is being developed by Florida’s Turnpike Enterprise with a focus on tolling. It is currently the only facility under development in the country that combines autonomous vehicle and tolling technology. Lynx, UCF, MIT, FAMU, and FPU are all partnering on research at the facility.

The Villages program though is the most significant step forward for the state’s effort due to the availability to see real world results including with a senior population that might not be as technology savvy as the population in other test communities like San Francisco, Portland, or Philadelphia.

There are concerns about how seniors may embrace the technology. Less than two years ago only 9% of those aged 51-64 said they would feel confident using an AV. The reality though is much harder to predict with similar numbers regarding early smartphone usage, only to be proven woefully inaccurate in the following years.

Brandes introduced a new bill this month that would allow for AV to not be required to have any human being in the car, which would open them up to more uses, such as deliveries.

Just as The Villages lays out its self-driving taxis, another privately owned city in Florida is rumored to be doing the same. There have been strong rumors that Walt Disney World is looking to automate its bus fleet in the coming years. The LA Times reported last year that Disney was “late-stage negotiation with at least two manufacturers of autonomous shuttles – Local Motors, based in Phoenix, and Navya, based in Paris.” The article went on to predict that employee AV shuttles could be online by the end of 2017. There is currently no evidence of such a system in place but last year’s hurricanes could’ve put a delay in the program which may still launch this year.

AV shuttles have also been discussed as a possibility for UCF's main campus, the Creative Village, and the Lymmo lines in downtown Orlando. The City of Orlando is one of ten cities that the USDOT is testing self-driving cars in. In his most recent State of the City address Orlando Mayor Buddy Dyer stated;


"Over the next several years, our region is going to work together to pilot and help commercialize the autonomous vehicle technology that will, literally, change this world."


HART in Tampa announced that it would have AV shuttles this year’s Gasparilla festival which is on the same weekend at the NHL All-Star Game at the Amalie Arena. HART had hoped to make Tampa the first city in the nation to have AV as part of the daily public transportation system, but Las Vegas beat them to it with a shuttle it launched roughly eight weeks ago.

Back in The Villages, the system will launch with a pilot area around Lake Sumter Landing and expand to cover the entire community in the coming years. Residents can register to use the service via the company’s website voyage.auto.

The Gist The Villages self -driving AV cars taxis