Band of the Week: Dial Drive 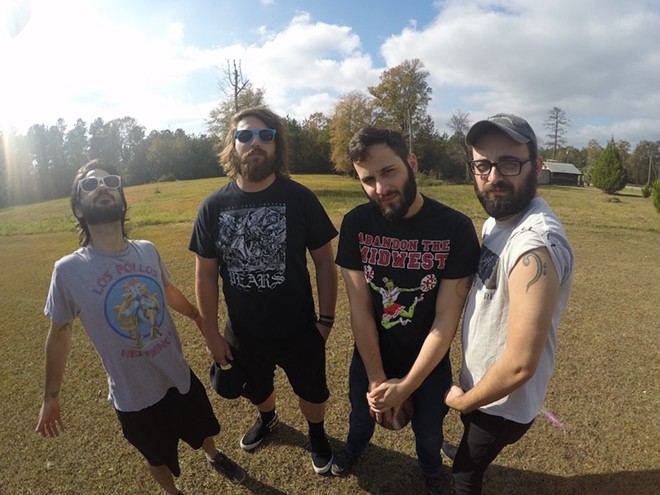 Welcome to Orlando Weekly's "Band of the Week." Every week, we highlight one of our favorite local bands. This week, we're pleased to bring you Dial Drive.

When did the band form?
We started in September of 2016, so we’re just over a year old.

Who's in the band?
Since Jake and Nate started the band, we’ve had a few lineup changes. This is our current and most well known lineup.
Jake LeDrew - Guitar and Vocals
Nathan Durazzo - Better Guitar and Vocals
Tim Bruder - Bass
AJ Ferrara - Drums

Currently available releases:
We released our debut EP, Never Go Home in April, 2016. It can be found wherever you can listen to music. Spotify, iTunes, etc. Here’s our BandCamp.

Websites:
The easiest way to keep up to date with what we’re up to is our Facebook

What has been your most memorable show so far?
Man, that’s definitely a tough one. We’ve played so many killer shows in the short time we’ve been a band. I would have to say my favorite was the Hurricane Party in Sanford, FL last year. It was an all day music fest and we met so many rad people.

Which local band is your favorite one to play a show with?
Oh that’s an even harder question to answer. I’d have to say our boys The ProblemAddicts. We’ve played a lot of shows together, and have even toured together. With insane local bands like 69 Fingers, and Abandon The Midwest, it’s hard to choose a favorite.

What description gets used for your band that you would most
like to correct people on? Why?
Sometimes after shows, people will come up to us and say how good we are. Correction, we’re not that good.

What’s your favorite thing about being an Orlando band? What's your least favorite? Why?
My favorite thing would have to be the great Alternative and Punk local music scene. There’s so many great people and bands in the local scene we have here in Orlando, and we’re just so happy to be a part of it. Least favorite is kind of hard to answer; Orlando has been great to us.

Any big news to share?
2018 is looking to be a busy year for us. We have our second EP “Viva Le’Jit” being released on 1/17, and then our release show on 1/19 at Will’s Pub. We have a few small tours in February, including one with Mustard Plug. After that, we have two small tours in March, and then a 25-30 day Northern tour in May.

The Heard band of the week dial drive