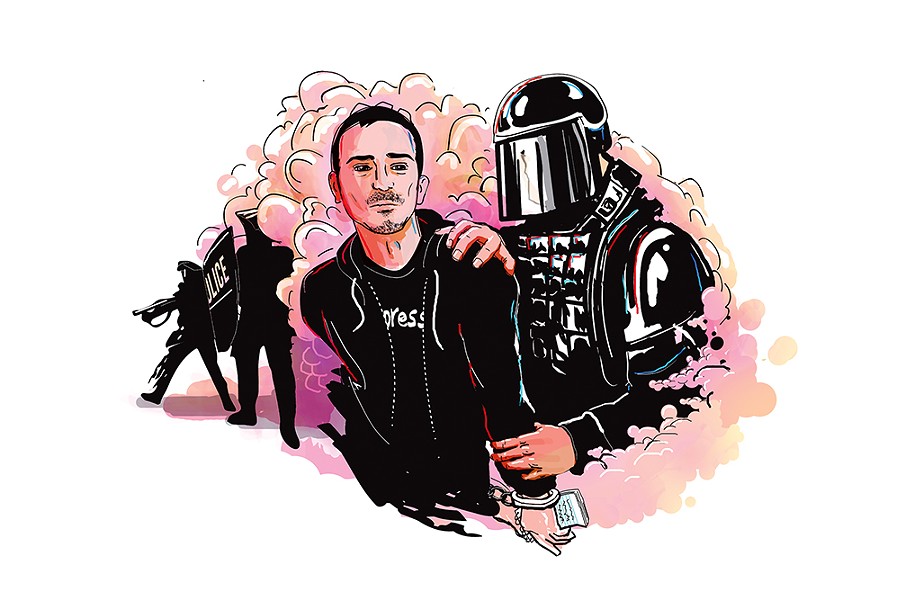 On Thursday, federal prosecutors in Washington D.C. dropped charges against 129 of the 188 people facing rioting charges during protests of Donald Trump’s inauguration last January. The decision comes after a jury found all six of the defendants in the first round of trials not guilty on all charges on Dec. 21.

“The U.S. Attorney has essentially admitted it never had the evidence to charge these innocent people in the first place, and we’re gratified to see they’ve come to their senses,” the ACLU-D.C. said in a statement. “For a full year, the government’s abusive prosecution has upended the lives of these defendants, who’ve endured the anxiety of multiple court hearings and suffered disruptions to their educations or careers while facing the prospect of more than 60 years in prison.”

The government’s notice of intent to proceed lists three reasons for the continued prosecution of the 59 defendants named — and in doing so seems to acknowledge that there was never a strong case against the 129 people, all of whom have spent the last year looking at the possibility of spending the rest of their lives in jail.

Many treat Trump’s war on the press as a Twitter feud. The prosecution of Cantú and others who have talked to the press shows that it is far more than that. click to tweet
“By that justification as written, it doesn’t make any sense for me to be one of the people they are focusing on. But it has never made any sense to be focusing on any of us,” says Elizabeth Lagesse, one of the defendants in the case who is also part of an ACLU civil suit against D.C.’s Metropolitan Police Department and a number of individual officers who, they claim, violated civil rights or engaged in violence while on duty that day.

“With my case in particular I wonder if it has something to do with the fact that I’ve been outspoken or that I am part of the ACLU lawsuit,” she says.

Petrohilos says he was not even at the protest. Months later, police officers raided the home where he was living, taking an antifa flag and copies of progressive magazines like The Nation as evidence.

Since the beginning of the case, MPD and U.S. prosecutors have worked closely with far-right media. On the day of the protest, a police officer released a spreadsheet with the names of everyone who was arrested to the far-right site Gotnews.com. In the first trial, prosecutors made liberal use of videos of an alleged planning meeting secretly recorded by an operative for James O’Keefe’s shady far-right sting site Project Veritas. Although prosecutors had previously argued for a protective order that would prohibit body camera footage from being released to the media, the night before they filed their intent to continue prosecuting 59 individuals, D.C.’s Fox 5 released “new” footage showing some members of the black bloc anti-capitalist protest breaking windows. To the defendants still facing charges, the timing did not seem coincidental.

Journalist Aaron Cantú is among those still facing charges. Eight journalists were initially arrested, although charges against most of them were quickly dropped. Alexei Wood, a photojournalist who was live-streaming the protest, was one of the six acquitted on all charges. Cantú’s lawyers filed a separate motion to dismiss on Friday, hours after the government announced it would continue with its prosecution of him.

“This case doubly implicates the First Amendment, because not only was Mr. Cantú present as a journalist to gather and disseminate the news, but the newsworthy event he was covering was a political demonstration,” the motion reads.

Cantú’s charges are based on the fact that he arrived where the black bloc was meeting, wearing dark clothes, and that he moved with them. His lawyers liken Cantú to a journalist embedded with the military.

“Mr. Cantú’s brand of journalism continues a time-honored tradition of journalists who have embedded themselves to provide first-hand accounts of important events,” the motion reads. “American history is replete with examples of journalists sacrificing their own personal comfort or safety for the sake of a worthwhile story.”

The decision to continue prosecuting a reporter for the actions of people he was covering comes only one day after Republican Sen. Jeff Flake gave a long speech criticizing Trump’s attacks on the press as the “enemy of the people.”

“It bears noting that so fraught with malice was the phrase ‘enemy of the people,’ that even Nikita Khrushchev forbade its use, telling the Soviet Communist Party that the phrase had been introduced by Stalin for the purpose of ‘annihilating such individuals’ who disagreed with the supreme leader,” Flake said. He did not mention the name Aaron Cantú in his speech. Nor did the pundits who attacked the president’s “fake news awards” given out later that same night.

Most of the mainstream media still treats Trump’s war on the press as a Twitter feud. The prosecution of Cantú and others who have talked to the press such as Lagesse and Petrohilos shows that it is far more than that.

In most jurisdictions, these crimes would be prosecuted by state’s attorneys, but in the District of Columbia, the Department of Justice oversees such prosecutions. The suit cites specific DOJ guidelines intended to prohibit just such prosecutions of the press. But when Jeff Sessions’ prosecutors ignore those rules, the mainstream press remains shamefully silent.

Cantú and his lawyers are clear about the stakes, however. “Prosecution of journalists not only imposes severe penalties on the individual journalists arrested and charged, but it significantly deters other members of the press from exercising their constitutional rights,” the motion argues, claiming that “the government’s conduct amounts to an outright ban on newsgathering at demonstrations.”

But it is not only journalists who enjoy the protections of the First Amendment. Lagesse, who appeared on Vice News days before the government’s notice was filed, is insistent that she will not back down.

“If they’re going to fight, so am I,” she says. “If they think they have a good case against me, then they’re wrong and I want to keep fighting. If it’s because they’re mad that I have been outspoken, I’m not planning on being any less outspoken.”