Florida man finds alligator outside his home, decides to wrestle it 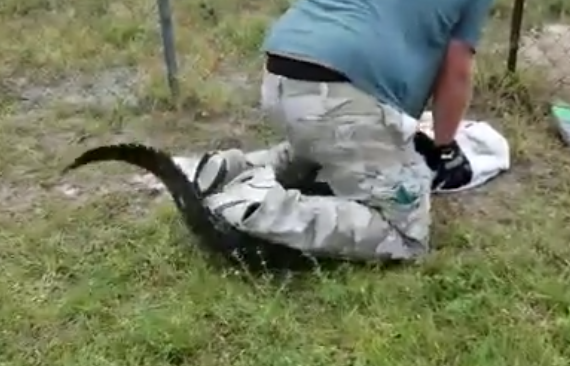 Hey, sometimes you might feel you have to wrestle an alligator.

Bokeelia resident Michael Stauffer recently found a gator in his backyard, and rather than contacting the proper authorities, he decided to grab a broom and towel and wrestle it into submission.

Using the towel to obscure its view and duct tape to wrap his mouth, Stauffer was able to subdue the animal before tossing it into the back of his truck and driving it to the closest Florida Fish and Wildlife office.

Florida golfers play through while a massive gator fights a python
By Gunnar Shuler
Blogs
When asked if he would try this maneuver again, Stauffer told WFTX that he wouldn't because it is considered illegal.

It is illegal to capture or destroy problem alligators unless you have a contract or permit with the Florida Fish and Wildlife Commission.

For more information on what to do with an inconvenient gator, visit the FWC website.