In the quest to make retail and theme parks ever more interactive, Disney filed a new patent application that hints at plans to finally respond to the popular interactive wands over at Universal Studios.

The new “Location-Based Experience with Interactive Merchandise” patent application was filed earlier this month. It gives details on numerous merchandise items and how Disney imagines they could be used for interactive experiences.

The application seems to point to a game that users activate with specific merchandise. While the application mentions clothing, headwear, carryable items (like wands), and mobile devices, the primary example used in the application are gloves. The application specifically mentions using gloves to activate “an image of a stream of ice particles” in what many interpret as an indication of a Frozen tie-in.

The same thing could easily be used with a Spider-Man theme.

We’ve known for some time of similar interactions within Star Wars: Galaxy’s Edge, but the new patent application seems to point to interactive experiences within gift shops and other locations.

Disney does have similar experiences already within its parks. The Magic Kingdom has seen two different experiences that are similar to the new application. Both of those used cards to activate small interactions, either via robotic props, similar to Universal’s interactive or via highly themed digital screens. The new experience goes well beyond this, though. It features numerous effects, including taste and smell, and adjusts the effects based on the user, their previous play history, and current location.
Also different is this allows for multiple players to be able to play together. Previous applications specifically mentioned tools, like lightsabers, but now the idea has expanded to include a possibly endless variety of toys that it can be linked with.

While the application mentions gift shops, the interactive displays could be located anywhere, including inside resorts, on the cruise ships, or even off-site in locations like Disney stores or as marketing displays at movie theaters.

So, for now, just stick with Universal’s wands while we wait to see what Disney has in store next year when Star Wars: Galaxy’s Edge opens. 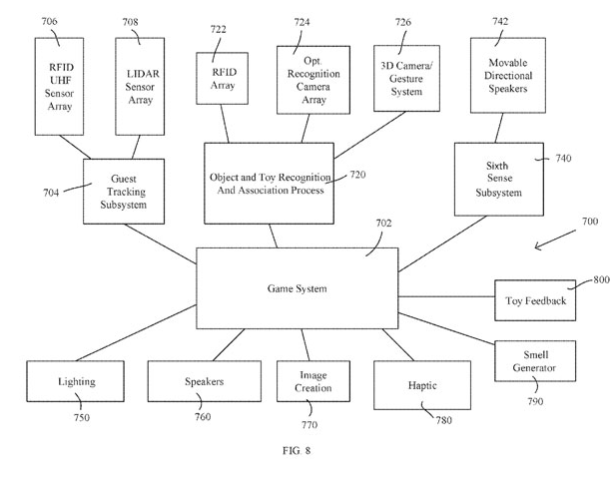