A rogue penis made an appearance at an Orlando pizza joint 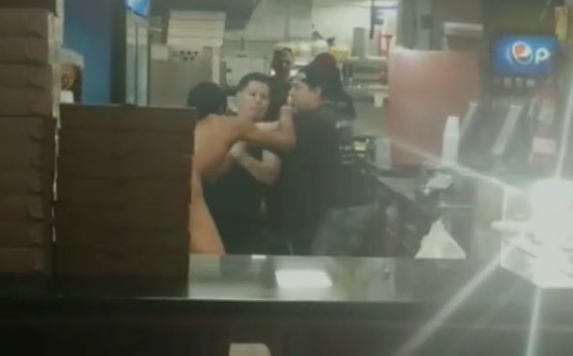 Penis and pizza can be an unsavory combination, unless of course it's Dong Pizza. But typically, it's safe to say these two don't mix.

A recent video posted to Facebook shows a man stripping naked, and climbing over the counter at a Panino's, a downtown Orlando pizza joint.

(UPDATE: The video has since been removed)

In the video the man seems to be arguing with staff members and then decides to get completely naked and climb over the counter, hovering his sausage just inches over the various toppings.

Once over the counter, the nude dude is kept at arm's length by the staff, who clearly don't want to touch the guy. They eventually manage to get him out from behind the prep area, and into the dining room. The naked and presumably hungry man then decides to sit at the front table with no pizza. Sad. Alone.

Don't be this rogue penis.

UPDATE:
According to report from the Orlando Police Department, an employee made contact wth the suspect, who was unable to be identified because he had no ID, and he began to lick a window. After jumping over the counter, the suspect struck the employee multiple times before getting removed from the restaurant.

When an officer arrived, the suspect was licking the floor and appeared to be "under the influence of drugs and possibly mentally ill."

OFD arrived and transported the suspect to ORMC. No charges were filed.