Orange County teachers plan to "teach to the contract" for a week next month in protest of the unpaid labor that is required for their jobs.

At a meeting of the Orange County Classroom Teachers Association earlier this week, union leaders decried teachers' working conditions, which they say ultimately affects their students' learning conditions in Orange County Public Schools. The CTA says teachers work, on average, over 20 unpaid hours beyond their contractual 37.5-hour workweek to complete mandated tasks. Wendy Doromal, president of the CTA, said too many great teachers and instructional personnel are leaving the profession – since last July, 310 teachers have retired or resigned from OCPS, and 19 more have already given their notice of leaving.

"Teachers want to teach," Doromal said. "You want to bring the joy of learning back to the classroom. You want a choice in the selection of curriculum and you want your autonomy returned. You want to be trusted to create and implement your own lesson plans and assessments that are tailored to your particular students and meet their particular needs."

From Feb. 12 through Feb. 16, the union is asking teachers to uphold their contract by prioritizing planning, instruction and grading. Teachers pledged they would not: work home or work outside of the 7.5-hour workday; work during their duty-free lunch unless they're being paid; attend after school events unless they're being paid; and answer emails or make job-related calls after the work day.

Teachers will also be rallying outside the school board meeting on Tuesday, Feb. 13 at the Ronald Blocker Educational Leadership Center at 445 W. Amelia St.

The CTA is also asking teachers to oppose HB 25, a union-busting bill sponsored by state Rep. Scott Plakon. The measure requires decertification of unions where less than 50 percent of eligible employees opt to pay union dues (it excludes unions representing police, firefighters and correctional officers). The bill has already passed in the Florida House. Doromal says if the measure is signed into law, the union's contract could be thrown out, and the district would be in charge of setting salaries and working conditions.

"This legislation is about extinguishing the most powerful voice in Florida that supports public schools – the teachers’ union," CTA said in a statement. "It’s about silencing the strongest advocates who oppose privatization of public schools and oppose vouchers. Teachers and teachers' unions view public education as the cornerstone of our democracy. Legislators want to dismantle public education brick by brick." 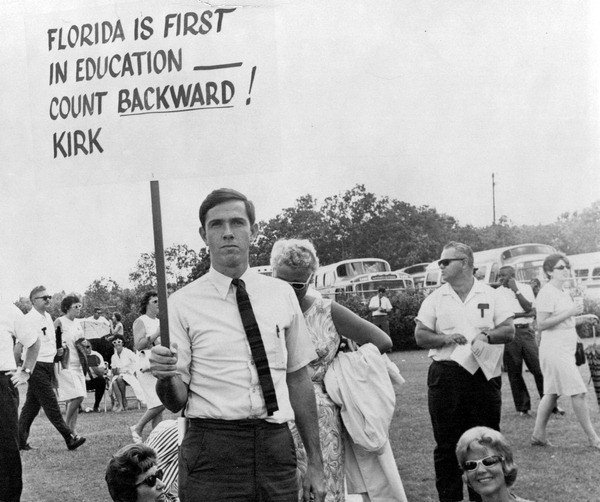 Doromal evoked the teachers' walkout of 1968 to encourage members to stand up to attacks from Florida lawmakers. Fifty years ago, the Florida Education Association (FEA) staged the first statewide teachers' strike in the country in response to the governor and Legislature underfunding public education. A total of 35,000 teachers and administrators across Florida handed in their resignations in protest. Ulysses Floyd, former president of the Orange County CTA, was one of the thousands of teachers who joined the strike. On Monday, Floyd, who taught for 32 years, told teachers he stayed out for three weeks during the 1968 walkouts without pay.

"Now if you walk out, you lose your certificate – you lose everything, you're fired as a teacher," he says. "But we had to take a step. … My students, when I came back, they clapped. They knew what we were doing. We were trying to make things better for them. And that's exactly what you're doing now."