Daytona's FannyPack spark bright in Orlando debut at the Falcon

It was a night of decent but literal acts. Although occasionally brawnier with the rock, Gainesville’s Sports Reference were by-the-numbers classic emo. And solo local act Tourist Season – perhaps the most apropos name for an Orlando act ever – was straightforward folk punk.

But the highlight of the night, FannyPack, came as a total curve ball. To refresh memories, FannyPack were a New York City party-rap act that struck a little lightning early this millennium with the comical throwback bass jam “Cameltoe.”
It was an underground smash way back in 2003 that I totally dug, so imagine how my eyes popped to see the name on a bill here in 2018 buried among a Central Florida roster. Ha, well, it seems that despite the same exact distinctive moniker stylized in the same exact distinctive way, this FannyPack is not that one. Needless to say, it was a bummer realization. You don’t even know.

This FannyPack are a Daytona Beach rock band that’s probably too young to even know who the OG FannyPack were. As it turns out, though, they’ve got their own thing entirely, and it’s utterly on the pulse. I try not to overextend the words “girl” or “female” as a descriptor, but they call themselves a girl band (even with a new male drummer) and it’s with purpose and pride.

Without question, their punk-hopped jams were full of heart and fun. But under it all, propelling everything from their music to their bearing, was a bursting sense of empowerment and optimism, one that is unmistakably now. And there’s no more crystal embodiment of that than their iconic singer Martha Lawrence, who is a natural performer and a powerful presence.

Pop-punk didn’t ask for it but it needed one, and now it’s got its own Sinéad O’Connor (a comparison not made lightly and goes far beyond just the shaved head).

In not just my own head but in the fever of the entire room, it was clear: FannyPack were the ones who brought the buzz. And what this Orlando debut proved is that they’re a potential star that deserves to shoot. 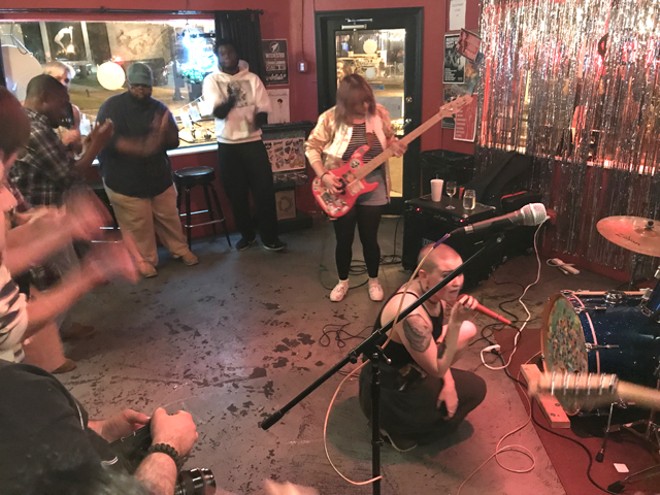 See what the fuss is all about for yourselves when they return to the Falcon on Feb. 16 alongside excellent Tampa band DieAlps!, who impressed here last year and are probably the most exciting prospect right now on New Granada Records.