Despite a controversial new detention agreement with ICE and 17 Florida sheriffs, the Orange County Corrections department said it won’t alter its current procedures on housing undocumented immigrants for federal officials.

"Orange County Corrections has had an effective process in place to house federal inmates within a local jail for more than a decade," said Dr. George Ralls, Orange County director of health and public safety, in a statement. "At this time we have not yet determined it necessary to alter any of our current procedures within Orange County Jail."

Past federal court rulings have found ICE detainer requests, unlike a warrant, do not give local jails the power to hold inmates after they could be released because it's unconstitutional under Fourth Amendment protections against being held without probable cause. ICE and Florida sheriffs have argued this new agreement will protect the community while reducing their risk of being sued for civil rights violations.

"For years, sheriffs have had to choose between releasing criminal illegal aliens from their jails back into the community, or exposing themselves to potential civil liability," Pinellas County Sheriff Bob Gualtieri said in a statement. "Both choices are unacceptable and that is why the Basic Ordering Agreement model being unveiled today is the linchpin in allowing us to faithfully execute our public safety duties."

But the Southern Poverty Law Center said it's "difficult to determine" whether ICE's agreement with Florida sheriffs is constitutional.

"ICE and the Florida sheriffs cannot simply contract their way around the Constitution," said Lisa Graybill, deputy legal director for the SPLC, in a statement. "The law is clear that local jails must have a legal basis to hold an individual, and absent that, they may face expensive lawsuits. Other states should think twice before following Florida’s lead." 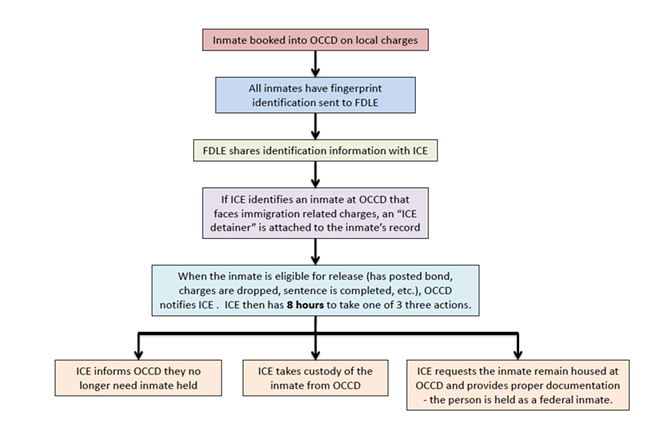 In Orange County, after inmates are booked into the local jail, their fingerprints are sent to the Florida Department of Law Enforcement for identification. FDLE shares that information with ICE. If ICE identifies a jail inmate who faces "immigration-related charges," an ICE detainer request is attached to that inmate’s record, according to county protocols.

When that inmate is eligible for release (which includes posting bond or having criminal charges dropped), Orange County Corrections notifies ICE. Federal immigration officials then have eight hours to either inform Orange County that they no longer need the inmate held, take custody of the inmate or request the person be held at the jail as a federal inmate and provide a warrant.

"If no action is taken in 8 hours (including nights, weekends and holidays) the ICE detainer is closed – inmate is released,” county protocols said.