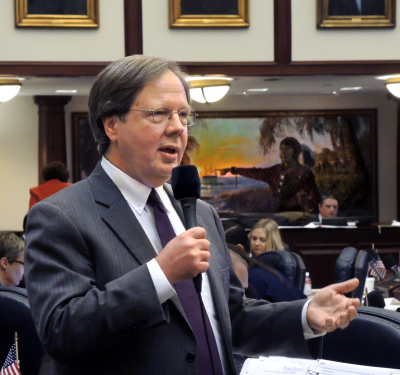 The Florida House is expected to vote Thursday on a proposal that would decertify a public union if its voluntary dues-paying membership falls below 50 percent.

Republican Rep. Scott Plakon of Longwood has been trying for several years to pass a measure similar to House Bill 25 that opponents say would only lead to the weakening of labor unions.

Brodie Hughes, president of the International Union of Police Associations, says the bill should face bipartisan opposition because it disrupts workers' ability to provide a foundation for their families.

"I personally am a Republican and a union leader," he says. "That's probably an oxymoron to many to say that but, you know, I think it's important that Republicans that are supporting this bill take a really hard look at this and realize that unions provide a voice for people. It provides job stability."

Plakon says his bill promotes transparency because rank-and-file workers are being represented without consent.

The bill is expected to pass the House again as it did in 2017, but its fate in the Senate, with three committees remaining, is uncertain.

The bill also requires unions to report to the state annually how many employees are eligible for representation by the union and then how many of them do and don't pay annual dues.

Les Cantrell, national representative with the National Association of Government Employees, says employee classification changes could put the union in jeopardy of being decertified.

Fredrick English, a union leader with the SEIU Florida Public Services Union identifies as a Republican. He says there are a lot of misconceptions about labor unions.

"They may see it as something that is a liberal crutch and that is not the case," he states. "I find it vitally important to have collective bargaining, and that's what unions provide. Without it, there is no way that I would probably have a job right now if I didn't have it."

Plakon's bill exempts police, firefighter and correctional unions from the requirements, but members of those unions say they are also standing in opposition to the bill.