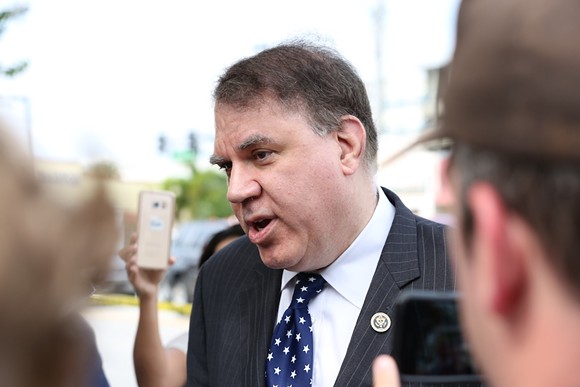 Early today, fact-checking site Politifact announced that it had hired former Florida Reps. David Jolly (a Republican) and Alan Grayson (a Democrat) as "reader advocates," ostensibly to fight accusations of liberal bias. (Turns out liars don't like it when you point out they're lying.) Politifact’s Aaron Sharockman said both men would be "free to critique any of our fact-checks starting today, and we won’t restrict what they have to say."

Almost immediately, the Twitterverse expressed disbelief, pointing out that Grayson had gotten into a physical altercation with a reporter in 2016. (Fingers were pointed, ugly things were said, chests were bumped.)

At a time when the credibility of journalism is under attack, @PolitiFact is supposed to help us understand true from false. @AlanGrayson who shoved a reporter for uncovering years of police reports of alleged domestic abuse has no place in such a role. https://t.co/1WN6TYQrPR

Politifact backed down within hours, saying they realized Grayson didn't "improve [their] trust and credibility":

We sought out a Democrat and Republican to critique our work in order to try to improve the trust and credibility in fact-checking and PolitiFact. It has become clear our choice of Alan Grayson did not meet that threshold to many. pic.twitter.com/uJuoHhiObI

Grayson, a hedge-fund manager-turned-pol who often looks like he's ready to step into the role of the Giant in a community-theater production of Jack and the Beanstalk, has had a colorful and contentious political career.

These days he's mostly disregarded, thanks to his many missteps and unfortunate turns of phrase. Who can forget the Reddit AMA in which he refused to post a pic of his cat, the time he offered to argue with your Democrat-hating relatives on Thanksgiving (for the low campaign contribution of $3), the time he accused Joy Reid of "sliming" him on her MSNBC show?

Then again, sometimes he got it right – like when he said Marco Rubio should adopt all the Zika babies if he was so set against exposed mothers choosing to terminate their pregnancies.

And no matter what, we will always have a place in our hearts for the man who stood on the House floor, looked his GOP colleagues right in the eye, and boiled down their health care plan to the bones: "Don't get sick. And if you do get sick, die quickly!"

So anyway, godspeed, Alan. That sure was a quick turnaround.