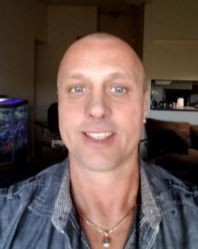 Michael Shawn Hunt, 43, was charged with aggravated stalking with a credible threat and attempted kidnapping with a weapon, according to a police report.

Detectives say they received a tip from a caller alleging Hunt was making posts that were "cryptic and threatening in nature" toward the singer, whose real name is Elizabeth Woolridge Grant. On Facebook, Hunt frequently professed his love for the singer and wrote on Jan. 30, "I want to see my queen on Friday and from that day forward our decisions will be as one." On Feb. 2, Hunt said, "I can barely touch the electronics anymore it's probably my last day on Facebook. I hope to see y'all on the walk about in your life be good and I'll see you on the other side everybody."

Orlando Police say they considered the information a credible threat and that Del Rey "was in fear for her safety." On Feb. 2, officers found Hunt one block away from the Amway Center with a 3-inch folding knife and tickets to Del Rey's concert.

"At no time was he able to make contact with Ms. Grant," the police report says.

After the incident, Del Rey posted on Twitter that she was "fine."

Hey kiddos.
I’m doing fine thanks for the messages. And tomorrow we’ll be in Hotlanta can’t wait to see everyone. Yachty that means u. pic.twitter.com/hwrRYyrA3E

Hunt is currently being held at the Orange County jail without bond. He has served time in state prison in the past for convictions on several felony charges, including forgery, grand theft of a motor vehicle, grand theft with a firearm and burglary, according to records from the Florida  Department of Corrections.

"The Orlando Police Department always has security measures in place for all venues and events – some of those are visible, and some are not meant to be visible," OPD said in a statement. "It is our top priority to ensure the safety of all residents and visitors to the City of Orlando."