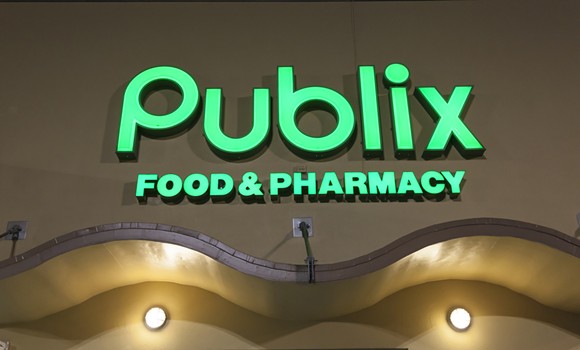 Florida's multi-billion-dollar grocery chain Publix is reversing its decision to deny its employees medical coverage for a pill that helps prevent HIV infections.

"We are working with our pharmacy benefits manager to implement this change as quickly as possible," Publix said in a statement.

The Lakeland company came under scrutiny last week after a report from The Body, an HIV resource site, said that a former Publix worker in Georgia had been denied coverage to use the drug Truvada as pre-exposure prophylaxis (PrEP).

The use of PrEP is for people who don't have HIV but are at substantial risk for the virus. The federal Centers for Disease Control and Prevention recommends PrEP for several groups including: people in ongoing relationships with HIV-positive partners; gay and queer men not in monogamous relationships who've had anal sex without a condom or been diagnosed with an STD in the past six months; non-monogamous heterosexual men, heterosexual women and queer women with bisexual male partners who don't regularly use condoms during sex with partners of unknown HIV status; and people who have injected drugs using shared needles during the past six months. When the daily pill is taken consistently, PrEP can reduce the risk of HIV infection in people by up to 92 percent, according to the CDC. The risk significantly drops further when combining PrEP with condom use during sex.

...regularly evaluate what is covered by our health plan and have made the decision to expand our health plan’s coverage of Truvada to include Pre-exposure Prophylaxis (PrEP). We are working with our pharmacy benefits manager to implement this change as quickly as... 2/3


The policy change comes less than 24 hours after Publix representatives met with Orlando Rep. Carlos Guillermo Smith, the first openly gay Latino lawmaker in the state Legislature. After meetings in Tallahassee, Smith said Monday that Publix confirmed they were denying insurance coverage for PrEP because "they do not generally offer coverage for medication to treat a medical condition that someone might get in the future." The Democrat pointed out, though, that the grocery chain does cover birth control.

"Florida is No. 1 for new HIV transmissions," Smith says. "If we are going to find a way out of the HIV epidemic, we are depending on large employers like Publix to be educated on the modern science of HIV prevention and understand they have a responsibility to make PrEP available to employees who need it."

While HIV rates have plummeted nationwide, in Florida the virus continues to ravage communities, with close to 2,000 deaths in 2014. The Sunshine State had the second-highest rate of HIV diagnoses among adults and adolescents in 2015, with 27.9 new cases per 100,000 people, almost double the national transmission rate. Both Orlando and Miami rank among the top 10 cities in the country for their high rates of new HIV diagnoses. The CDC predicts that if the current trend persists, about one in two black men who have sex with men and one in four Latino men who have sex with men will have HIV. The Florida Department of Health announced recently that the agency would begin providing PrEP for free throughout the state by the end of 2018.

While not insuring Truvada for PrEP, Publix did indicate it was covering the drug for employees using it to treat active HIV infections and for those who have been recently exposed to HIV as part of post-exposure prophylaxis (PEP). Known colloquially as the "morning-after pill," PEP is a month-long drugs treatment that must be started 72 hours after exposure to reduce the risk of becoming infected.

Smith says it wasn't clear from his conversation with Publix representatives if the company's initial objection to PrEP was because of the cost or a moral objection, in a similar fashion to religious groups and faith-based companies that refused to insure contraceptives. In 2014, the U.S. Supreme Court sided with Hobby Lobby in ruling that religious for-profit corporations did not have to provide coverage for birth control and other contraceptives despite a mandate in the Affordable Care Act.

People take PrEP for a number of reasons, Smith says, but there's no evidence to suggest that taking the medication encourages risky sexual behavior. For example, an HIV-negative person whose long-term partner is HIV-positive with an undetectable viral load will be on PrEP – with both partners on medication, this essentially eliminates the risk of any transmission. Smith adds that employers who refuse to cover PrEP put their employees' health at risk and are shortsighted – the financial cost of treating HIV is more expensive than a prevention pill.

"That is just the type of ridiculous slut-shaming we hear around PrEP, and it's absolutely akin to women being shamed for taking birth control," Smith says. "If an individual makes a private and personal decision with their doctor that HIV prevention is the right thing for them, it's not any of their employer’s damn business."

Smith says he applauds Publix for changing its policy.

"All around this way a win-win situation," he says. "We were able to encourage Publix to do the right thing by educating them on modern science and we had the opportunity to educate the public on what the HIV prevention pill is. … Diplomacy lives!"