Advocates say America is "breaking their promise" to hundreds of thousands of DACA recipients who were promised a solution to their immigration status.

Florida has about 27,000 recipients of DACA, which stands for Deferred Action for Childhood Arrivals. The Obama-era program protects around 690,000 undocumented youth from deportation and gives them a chance to work legally. The system was thrown into chaos after President Donald Trump rescinded DACA last September, putting the immigration status of thousands in jeopardy as he called on Congress to fix the issue before protections phase out. For months, undocumented youth have been calling on federal lawmakers to pass a "clean" DREAM Act, meaning legislation that doesn't increase funding for immigration enforcement, build a border wall or expand the private prison and detention centers system.

A bipartisan budget deal passed early Friday morning with no solution for the plight of DACA recipients, leaving many Democrats and immigration activists frustrated. In Apopka, advocates accused lawmakers of playing political games with the lives of "Dreamers" during a press conference. 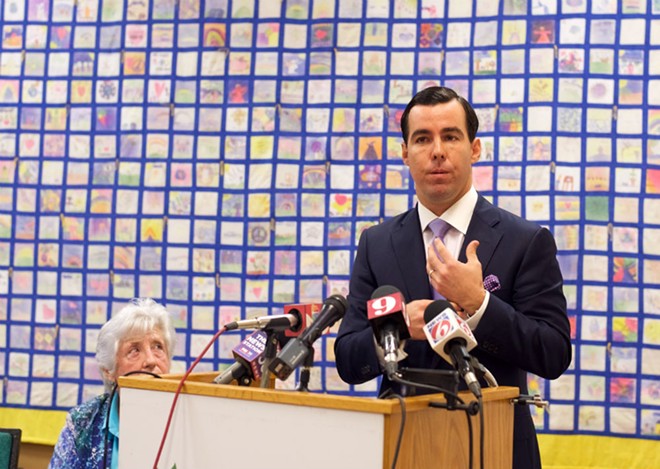 "If it's one thing America will not tolerate it's breaking your word and injustice," Morgan says.

Anallely, who asked to be identified by first name only, told the crowd she was here to express her humanity again in hopes of getting people to understand.

"I'm here as a woman," the DACA recipient says. "I'm here as a student. I'm here as an American with aspirations and dreams, just like your kids. … My family hurts the same way that yours does."

Like many DACA recipients, Anallely has become the rock of her family – she has a driver's license and she was able to help her parents buy their first home. Now she feels her family is under attack as they wait for comprehensive immigration reform that would not only help DACA recipients but also the estimated 11 million undocumented people who live in the U.S.

"The fact that I have to ask my mom to text me every time she gets to work hurts me," she says. "Just to check that she wasn't taken away. I have to make sure that my parents let me know that they get home. Even if five minutes pass after I know they get home, I get worried because I don't know if they're stuck in traffic or if they're stuck in a detention center. It's traumatizing to live this way."

Anallely says she's not willing to throw her parents under the bus for a deal on DACA.

Sister Ann Kendrick, of the Hope CommUnity Center, says every morning she gets calls from undocumented people who are being targeted for deportation on the way to work or school.

Kendrick also called out Florida House Speaker Richard Corcoran for what she says is a "racist, fear-mongering" ad against so-called "sanctuary cities" from a Corcoran-supporting PAC. The video depicts an "illegal immigrant" suddenly shooting a white woman as she walks through a suburb.

"It's a disgusting way to gin up his base and cause fear," she says. "It's un-American."

Kendrick encouraged the crowd to help undocumented youth by donating to the center and calling their representatives in Congress at 1-888-204-8353 to advocate for DACA recipients.