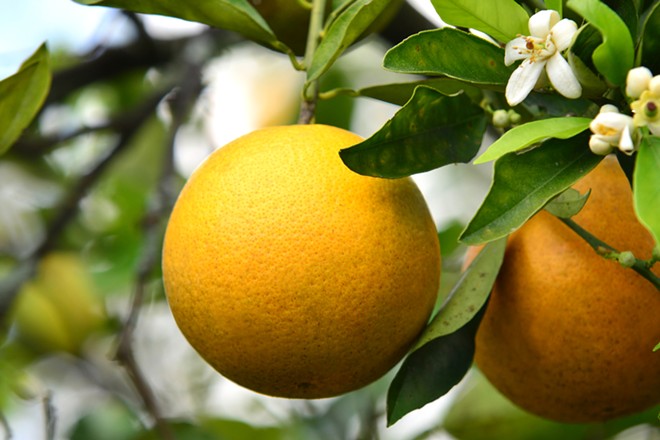 Projections for Florida’s orange crop fell slightly in the latest monthly forecast, as the storm-battered agriculture industry appears closer to getting federal relief that officials say is needed to keep parts of the industry afloat.

The U.S. Department of Agriculture estimated Thursday that Florida will grow enough oranges in the current season to fill 45 million 90-pound boxes, down from 46 million boxes in January estimates.

Meanwhile, estimated grapefruit production held at 4.65 million boxes for the third consecutive month, but the number represents a nearly 40 percent reduction from the past growing season.

While down slightly from the January forecast, the orange harvest is now projected at 34.5 percent below production from the past growing season, with Florida orange growers on pace for their lowest output since World War II. The industry has struggled for years with deadly citrus-greening disease and then got hammered by Hurricane Irma.

“We are still hopeful the remainder of the season holds stable," Shepp said, adding that the proposed federal disaster relief package gives “growers the confidence they need to continue making investments to keep this season's crop stable and produce more Florida citrus in the years to come."

The forecast came as the U.S. Senate advanced a nearly $90 billion disaster-relief package to aid Texas, Florida, Puerto Rico and other states and territories impacted last year by hurricanes and wildfires. The package is part of a two-year budget deal.

Gov. Rick Scott, who along with Agriculture Commissioner Adam Putnam, has lobbied the state’s congressional delegation for the disaster-relief funding, was cautiously optimistic Thursday about the aid package.

“It looks like we’re getting closer,” Scott said at the start of a Cabinet meeting at the Florida State Fairgrounds in Tampa. “But until we’re there, we’re not there.”

The relief package, which must get U.S. House approval, includes $2.36 billion for Florida farmers.

In a live Facebook session on Wednesday, U.S. Sen. Marco Rubio, R-Fla., said a “fundamental obligation of the federal government is to respond to natural disasters.”

“So obviously when Florida was impacted this year, and then Puerto Rico was impacted —- which of course impacts Florida as well, this was the opportunity to use (my) position on the Appropriations Committee to begin to influence the direction we went (for disaster funding),” Rubio continued.

Large parts of Florida’s agriculture industry were devastated by Hurricane Irma, which plowed through the state in September.

The state Department of Agriculture and Consumer Affairs has estimated Irma-related damages to the citrus industry at $761 million, the nursery industry at $624 million and the cattle industry at $237.5 million. The sugar industry has been estimated at sustaining $383 million in losses, while vegetable and non-citrus fruit growers suffered an estimated $180 million in damages.

"The disaster funding in this bill will not only help provide Florida's schools and citrus growers the help they need, it will also help Puerto Rico rebuild its power grid and avoid an even greater health-care crisis,” U.S. Sen. Bill Nelson, D-Fla., said.

The U.S. House in December approved an $81 billion package that included $2.6 billion relief for Florida agriculture. But the funding was separated from a spending bill and did not ultimately pass amid fighting over immigration issues and government spending.

State lawmakers also are looking at ways to help the agriculture industry.

The state House Ways & Means Committee, which is putting together a tax package, has reviewed a proposal that would offer one-time tax refunds on fencing and building materials for non-residential farm buildings. Also, a proposal would offer refunds on state and local taxes applied to fuel used to transport agriculture products from farms to processing and packaging facilities.

State Rep. Ben Albritton, a Wauchula Republican who owns a citrus grove, has said the state proposals would help provide some short-term relief to farmers and others in the supply chain.