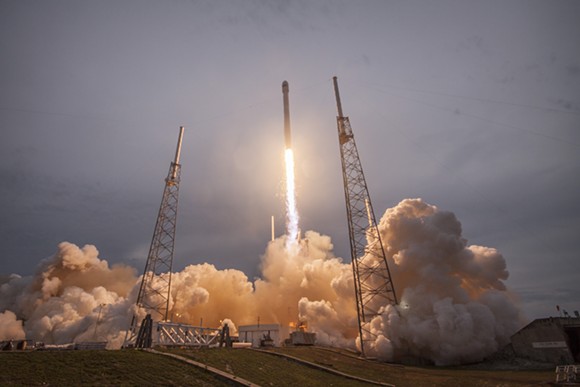 For billionaire entrepreneur and spaceman-of-the-hour Elon Musk, the Falcon Heavy’s launch on Feb. 6 was just a humble beginning.

Musk, the founder and CEO of the West Coast-based rocket company SpaceX, took to Twitter yesterday to casually mention how a third drone ship is currently under construction for the Space Coast. Its purpose: “[To] support high flight rates for Falcon 9 and dual ocean landings for Falcon Heavy boosters.” (Which is admittedly a bit wonky as far as space-talk goes.)

A third is under construction

A Shortfall of Gravitas

East, to support high flight rates for F9 and dual ocean landings for FH side boosters


Like Musk’s other two drone ships – “Of Course I Still Love You,” which is based at Port Canaveral, and “Just Read the Instructions,” which is based at the Port of Los Angeles – the third ship, dubbed “A Shortfall of Gravitas,” takes its name from a science fiction novel, The Player of Games, by Iain Banks.

As enlightening as Musk’s tweets may have been for space nerds everywhere, details on when construction began and the ship’s estimated time of completion are still under wraps.

On Feb. 6, the Falcon Heavy’s maiden launch captured the attention of people everywhere. Following the launch, two of the spacecraft’s three rockets landed simultaneously at Cape Canaveral Air Force Base’s landing Zone 1, but the main core was destroyed as it attempted to land on the drone ship “Of Course I Still Love You.”

Landing two boosters on two separate drone ships would be an incredible feat in its own, of course. Whether that’s the case or not, though, it would make for major business for Port Canaveral over the long run, since the rockets would be transported to the port, where SpaceX has a 53,000-square-foot refurbishment center and is leasing 2.2 acres of land next to the center to build a 67,000-square-foot building.

Port Canaveral is already reportedly planning to build a berth or dock to welcome the increase of rockets coming into the port for launch at nearby facilities.

An added bonus for Musk: The Falcon Heavy launch on the Space Coast also allows the area to grab a bigger chunk of the $300 billion commercial space industry.

For space nerds who’d like to track the luxury Tesla that Musk launched into space aboard the Falcon Heavy last week, check out this website.