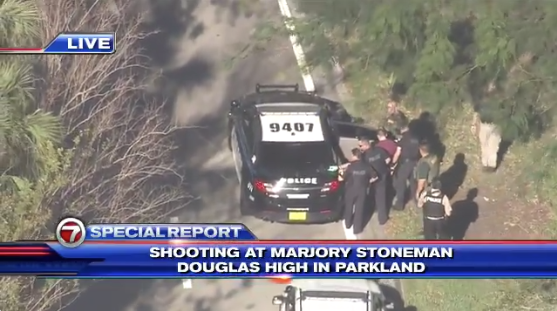 The gunman involved in the shooting at Marjory Stoneman Douglas High School is in custody, according to the Broward County Sheriff's Office.

The Sun Sentinel reports law enforcement authorities have reported multiple deaths at the South Florida high school, but the exact number of fatalities and people injured is still not clear. That number will likely change as more information is available.

Shooter is now in custody. Scene is still active. #stonemanshooting

So far we have at least 14 victims. Victims have been and continue to be transported to Broward Health Medical Center and Broward Health North hospital. #StonemanShooting


Coral Springs Police appear to be still clearing students from the school and are asking parents to pick up their children at the Marriott hotel, at 11775 Heron Bay Blvd. in Coral Springs. Earlier reports from South Florida media outlets showed multiple people being treated near fire rescue ambulances and students walking out of buildings with their hands up.

Please be patient, they are clearing every single room for their safety. Pick up will be at Heron Bay Marriott


Both Florida Gov. Rick Scott and President Donald Trump have tweeted their condolences.

Just spoke with @POTUS about shooting at Marjory Stoneman Douglas High School. My thoughts and prayers are with the students, their families and the entire community. We will continue to receive briefings from law enforcement and issue updates.

My prayers and condolences to the families of the victims of the terrible Florida shooting. No child, teacher or anyone else should ever feel unsafe in an American school.