Hide the teaspoons: To celebrate the one-year anniversary of the release of Get Out, writer-director Jordan Peele is giving away tickets to a free 7 p.m. screening on Presidents' Day.

The AMC Disney Springs theater will give away free tickets on a first-come, first-served basis when the box office opens on Monday, Feb. 19 – one ticket per person (up to theater capacity). Guests must present valid ID. The screening is at 7 p.m.

Get Out was 2017's surprise sleeper hit, racking up awards in a way that's pretty unusual for a classic horror flick. Though critics and moviegoers responded to it almost immediately, the establishment took a bit longer to get on board and seemed confused, as when the Hollywood Foreign Press Association nominated it for a Golden Globe (cool) but placed it in the Best Comedy or Musical category (wha?).

Peele's dignified response to being told the HFPA thought his fantastical take on the horrors white America perpetrates on black bodies was a laff riot:

‘Get Out’ is a documentary.


The Motion Picture Academy had a little more time to process Get Out's extreme relevance to the current political climate and shelled out Oscar nominations for Best Director, Best Actor, Best Original Screenplay and Best Picture. Place your bets now for a March 4 win.

Do they serve buttered popcorn in the sunken place? 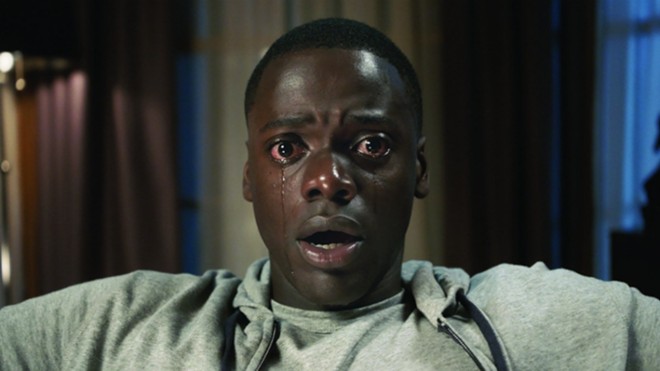 Check out AMC's #GetOutOneYearLater site for more info on the free screening.