My school is being shot up and I am locked inside. I’m fucking scared right now. pic.twitter.com/mjiEmPvGNb

Right now, a terrified student at Marjory Stoneman Douglas High School in Parkland, Florida, is hiding under his desk while an active shooter situation has his school on lockdown.

To make matters worse, reporters are bombarding him through social media with questions like "Can I use your photo on the air?" or "Are you available for an interview?"

The student, only identified as a freshman named Aiden, says they're still in the school and looking to Twitter for any updates from the outside.  But this hasn't stopped reporters asking for a "follow back."

Still locked in. I checked the local news and there is 20 victims. Long live Majory Stoneman Douglas High. pic.twitter.com/4kQMAlCBWt

Hello, Twitter. I am closing my DM’s but I appreciate everyone contacting me. I am still locked in the school, but remember I’m only a freshman. Please don’t just send your love to me, but pray for the victims’ families too. Love you all.

Yep. We now live in a world where students in active shooter scenarios have to deal with the press, while hiding from a potential killer.

Here are all the reporters that have reached out to Aiden in just the past hour. 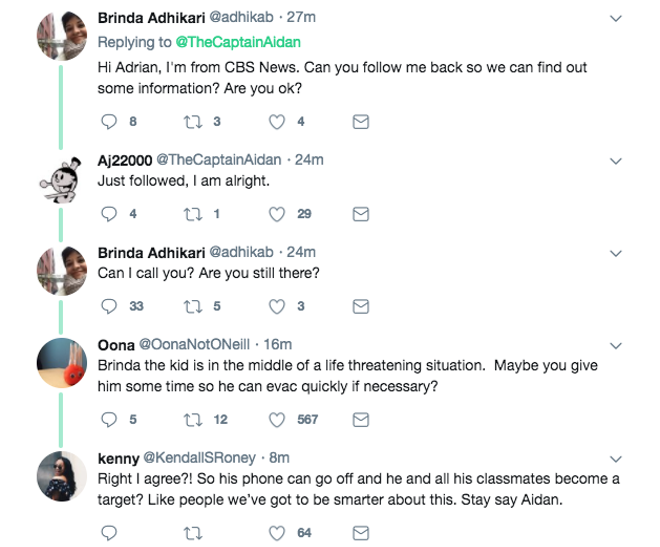 It should be noted that this type of information gathering is normal for media outlets, like just this morning a guy was asked by multiple reporters for permission to use a photo he took of a busted plane engine.

But tweeting at kids still under threat from a possible gunman is incredibly gross. Maybe next time wait till the situation is resolved before asking for a "follow back."

As of now, law enforcement officers are still searching for the shooter. Coral Springs Police are warning people to stay away from Marjory Stoneman Douglas High School in Parkland as they investigate the area.

It's being reported that multiple people have been treated for gunshot wounds.

UPDATE: Police now say the shooter is in custody.