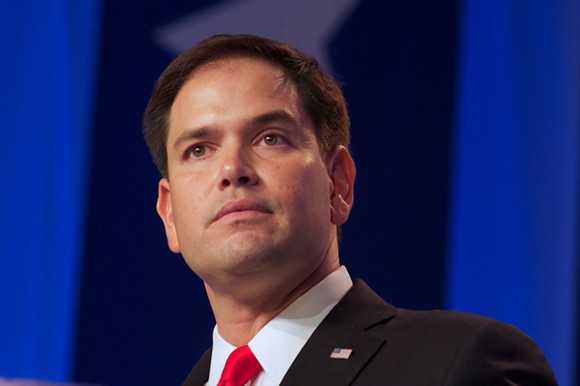 On Wednesday Sen. Marco Rubio, who over the course of his career has  accepted more than $3.3 million in donations from the National Rifle Association, told reporters that now is not the time to "jump to conclusions," after a 19-year-old gunned down his former classmates and teachers at a South Florida high school, killing at least 17.

Speaking to Fox News host Pete Doocy, Rubio said that "people still don't know how" the shooting occurred, or how the 19-year-old suspect, Nikolas Cruz, obtained the AR-15 he used to murder his classmates at Marjory Stoneman Douglas High School.

Well, according to the family of the alleged shooter, who had a history of domestic abuse and wasn't even allowed on campus with a backpack, bought the AR-15 legally and kept it in a gun locker at home.

"I think it's important to know all of that before you jump to conclusions that there was some law that we could have passed that would have prevented it. And there may be, but shouldn't we at least know the facts?" asked Rubio, who currently has an A+ rating from the NRA.

Related Marco Rubio, who accepted nearly $10,000 from the NRA last year, sends his 'thoughts and prayers' to Las Vegas

Marco Rubio, who accepted nearly $10,000 from the NRA last year, sends his 'thoughts and prayers' to Las Vegas
By Colin Wolf
Blogs
Considering Rubio received $90,205 in campaign donations from gun rights groups during the 2015-2016 campaign cycle, it's no surprise that Rubio is a master of backing away from sensible gun reform, or any reasonable attempt to curb gun violence.

In 2013, Rubio voted against a law banning high capacity magazines. In 2015, following a mass shooting in Oregon that killed 10, Rubio argued that gun control wouldn't have saved lives. "For example, these were not assault rifles, these were handguns that he had purchased," the Florida senator told the Today Show. "The laws that many are proposing would have done nothing to prevent these attacks."

Instead, Rubio insisted, we should be focusing on mental illness, which is interesting because that same year Rubio voted down gun legislation that would've made it harder for the mentally ill to buy guns.

After Pulse, he voted against a law that would've banned sales to anyone on a terrorist watch list, which could've possibly stopped the shooter who killed 49 in Orlando at a gay night club.

Our prayers are with those injured and killed early this morning in horrifying act of terror in Orlando.

After every other mass shooting on American soil, Marco Rubio has succeeded in doing absolutely nothing, followed by an almost comical offering of his thoughts and prayers in an attempt to hide his complacency.

Whether you call these shooters "mentally ill" or "lone wolves" or even terrorists, here in the United States they all have incredibly easy access to military-style weapons thanks to the NRA and the negligence of the Republican party.

As Rosanne Cash said in a New York Times op-ed, "There is no other way to say this: The NRA funds domestic terrorism." It's fucking true.

And, thanks to Rubio being so incredibly bought and paid for by gun rights groups like the NRA, we can expect him to not do a damn thing about it.