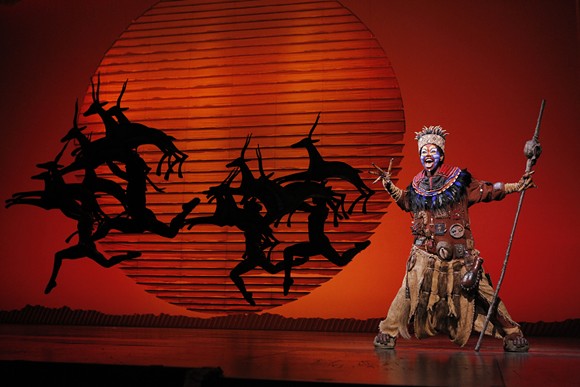 In an era when Disney is dedicated to digging every last cartoon classic out of their vault, turning it into a musical play, and then converting it back into a CGI film, it would be easy to feel cynical about The Lion King’s return to Orlando. But from the opening cries of “Circle of Life,” it’s clear that this new national tour is no lumbering Broadway behemoth, but a bounding gazelle of theatrical joy that elicits spontaneous ovations from the first giant elephant puppet to the final ingonyama.

After 20-plus years of "hakuna matata"-ing across the globe, it’s hard to imagine anyone on Earth doesn’t already know the story of Broadway’s The Lion King, aka Disney’s original Game of Thrones on the African savanna. Though this latest incarnation of the tale is largely identical to the tours we saw at Orlando’s Bob Carr in 2006 and 2012, associate director John Stefaniuk has done an exceptional job of not only re-creating Julie Taymor’s Tony-winning original direction, but revitalizing it by sharpening subtle moments. And the Dr. Phillips Center's Walt Disney Theater makes an ideal den for Simba and his herd, with percussionists and performers filling the box seats for a surround-sound effect, making this the best version of the show I’ve ever experienced.

The iconic opening number is still the high point among the Elton John-Tim Rice songs, but this first-class cast lets the superior but lesser-known numbers by Lebo M. and Hans Zimmer shine, especially Mufasa’s (Gerald Ramsey) stirring “They Live in You,” and Nala’s (Nia Holloway) soulful “Shadowlands.” Both young Simba (Joziyah Jean-Felix, alternating with Ramon Reed) and his adult counterpart (Gerald Caesar) bring a charming boyish bounce to the underwritten title role, which is gleefully beaten out of him by Buyi Zama’s Yoda-esque Rafiki. It’s entrancing to watch Nick Cordileone and Ben Lipitz manipulate their Michael Curry-designed Timon and Pumba puppets, even when their fart humor falls flat, and Zazu (Greg Jackson) gets the benefit of some updated jokes (including a thinly veiled Trump jab).

While it lives up to the legendary hype, this show suffers from a few wild hairs. Mark Campbell’s campy kabuki interpretation of Scar made me miss Jeremy Irons’ dry delivery, and his unintelligible hyenas (Martina Sykes, Keith Bennett, Robbie Swift) should have had their clunky “Chow Down” cut instead of skipping “The Morning Report.” Those forgivable flaws merely highlight how transcendent some of the transitional moments are, like the pedestrian movement of the dancing grasslands or the lioness’s gracefully gruesome hunting ritual. Whether it’s your first visit to the watering hole, or you practically own a timeshare on Pride Rock, this production proves that The Lion King still reigns after all these years.

Get our top picks for the best events in every Thursday morning when you sign up for our events newsletter.