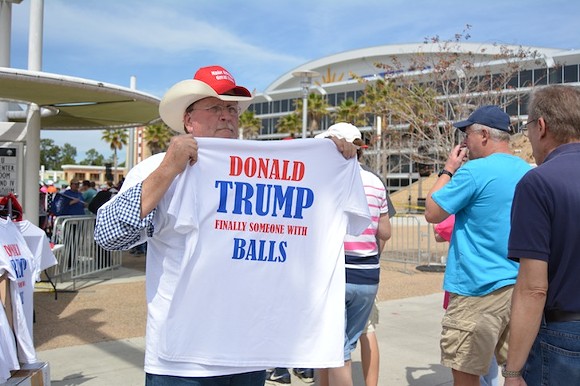 Overall, the massive indictment spans multiple states, but the Russian efforts in Florida were beyond noteworthy.

The indictment states that Russians agents fooled members of the Trump campaign to work with them, wired money to pro-Trump Florida groups, and even traveled to the United States to help organzine political rallies while posing as Americans.

According to the indictment, Russians worked with members of the "Florida Goes Trump" events, which were held in more than 20 cities across the state on August 20, 2016. At one of the events, Russians actually paid for an actress to pose as Hillary Clinton in a prison uniform inside a giant cage.

"In or around August 2016, Defendants and their co-conspirators used false U.S. personas to communicate with Trump campaign staff involved in local community outreach about the 'Florida Goes Trump' rallies," reads the indictment.

The FBI also says Russians used a fake Facebook account under the name "Matt Skiber" to communicate and coordinate with the "Florida for Trump" group.

Russians also allegedly stole the identity of a real person, referenced to only as "T.W." in the indictment, and used that person's identity to communicate with Florida pro-Trump groups, including "Being Patriotic," to setup flash mobs.

While the indictment is damning, it doesn't specify if officials with the Trump campaign in Florida were aware they were operating alongside Russian agents, or if they were just completely duped.

But it's worth noting that while Donald Trump praised Wikileaks throughout his campaign, he was actually getting briefings in August of 2016.

The Daily Beast actually first reported on these Russian-backed Florida events back in September of 2017.