Just days after a teenager shot and killed 17 of his former classmates and teachers in Parkland, Florida, agriculture commissioner and gubernatorial candidate Adam Putnam seems to have removed all references of his favorite line referring to himself as a "proud NRA sellout."

Putnam, whose entire campaign is centered on Second Amendment rights, literally closed the door on a Politico reporter Tuesday who asked if he'd still be using that moniker to describe himself.

Politico now says Putnam's once front-and-center "NRA sellout" messaging has been scrubbed from his official website and digital ads.

The saying originally came about last July when Tampa Bay Times columnist Daniel Ruth absolutely roasted Putnam for his shady ties to the gun lobby, calling him a "sellout" and an NRA bootlicker among other things.

Putnam then responded by pronouncing his love for his gun lobby overlords, and agreed with Ruth that he is indeed a "Proud NRA sellout."

Now it appears all that's left of Putnam's campaign slogan messaging is a lone tweet, where you can still sign one of his email farms online petitions to say you're also a sellout. 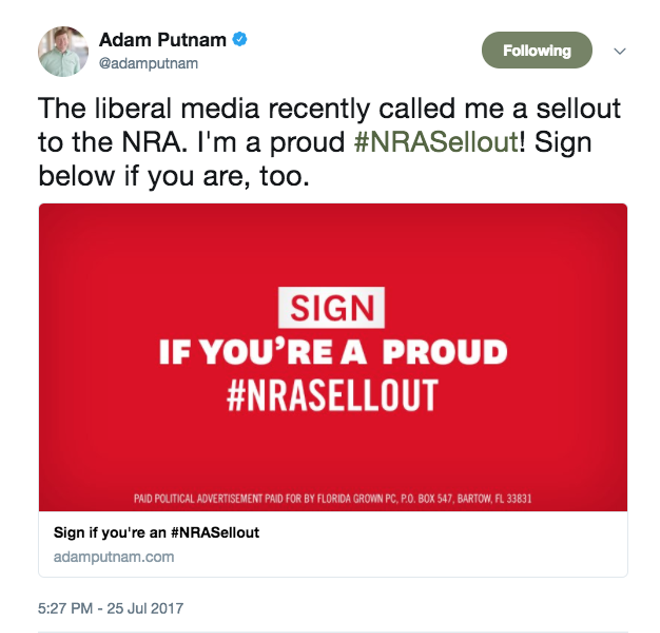 In the wake of the shooting, Putnam has also postponed his insane provision that would've relaxed background checks for gun owners.