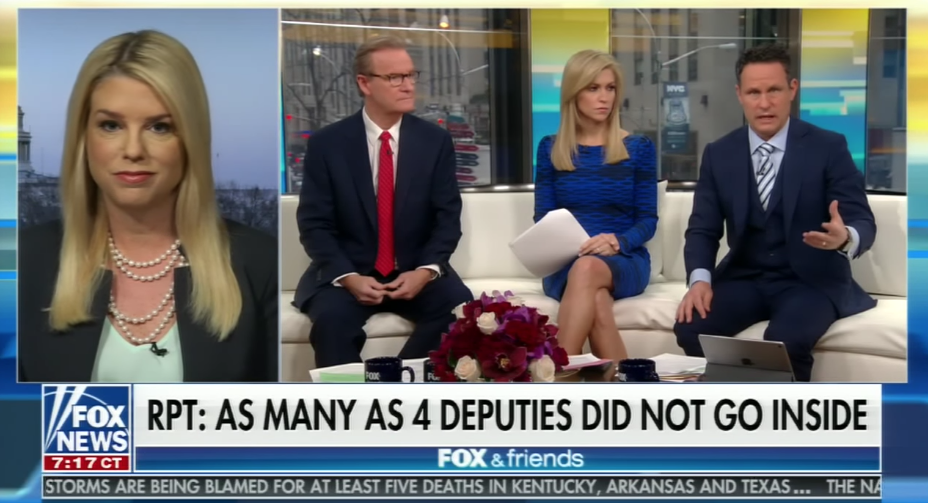 In an interview on Fox & Friends this morning, Attorney General Pam Bondi said she would have entered Marjory Stoneman Douglas High School during the Feb. 14 shooting – gun in hand, or not.

The incident, in which 19-year-old Nikolas Cruz stormed into his former high school with a semiautomatic rifle in hand and opened fire, left 17 people dead and more than a dozen others injured.

Bondi’s comments come as an investigation into the actions of first responders is currently underway. Last week, it was revealed that a Broward County deputy, Scot Peterson, the school’s resource officer, remained outside of the school as the massacre occurred. Peterson has since resigned from his law enforcement post.

“Let me put it this way, when you have a school full of students, and your duty is to protect those students, even if I didn’t have a firearm I would have gone into that scene. That’s what you do. That’s what the coach did who was a true hero,” Bondi told the cast of Fox & Friends.


Gov. Rick Scott has ordered the Florida Department of Law Enforcement to review the events leading up the mass shooting. Unlike Florida House Speaker Richard Corcoran and most of the state House Republican caucus, who have pushed for Broward Sheriff Scott Israel's resignation, Bondi says she favors Scott’s approach.

According to news reports, in addition to Peterson, three other deputies opted to remain outside of the school as the killing spree occurred.

Asked by one of the hosts if there had been a “stand down order” given to the deputies at the time of the shooting, Bondi simply replies, “I can’t talk about that.”

In an interview with State of the Union host Jake Tapper on Sunday, Israel defended the Broward County deputies by saying he has provided “amazing leadership.”

President Donald Trump – a five-deferment military draft dodger during the Vietnam War – reportedly concurred Bondi's tough person stance in a meeting with governors earlier today, saying, "I really believe I'd run in there even if I didn't have a weapon."