It was not too long ago that Christopher Rivera was one of thousands of kids who live in the cheap, pastel-colored motels along Kissimmee’s crumbling tourist strip Highway 192.

Under the long shadow cast by Disney World, the 10-year-old and his family made their home at the Paradise Inn – where by chance, filmmakers were scouting locations for a new movie by director Sean Baker called The Florida Project, about the antics of ex-stripper Halley and her 6-year-old daughter, Moonee, who struggle to make ends meet. One day, a crew member knocked on the Riveras' door and asked Sueheily Rivera if they could meet her son.

“Mommy, I wish I had a job,” Christopher had said two weeks earlier, according to his mother. “I can work so I can give you money, so you can be better.”

Christopher bounded down the stairs to charm Patti Wiley, an Orlando casting agent, and got the part of Moonee’s friend “Scooty” two weeks later in 2016. Life since has been a whirlwind for the family – The Florida Project’s riveting portrayal of homeless motel kids in the colorful underbelly of the state’s tourism industry enraptured critics and received countless awards and nominations alongside stars like Helen Mirren and Gary Oldman. 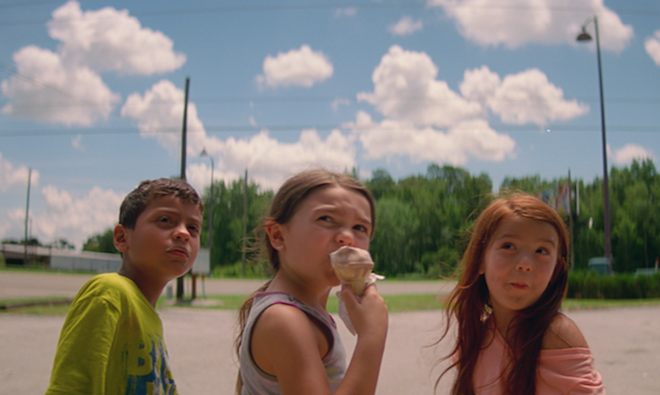 And last week, Christopher got another life-changing surprise.

After administrators at Rollins College saw the film, they were moved and entered into a partnership with Florida Project producers and its distributor, indie film studio A24. Rollins offered Christopher a full scholarship to the private liberal arts school.

On a tour Tuesday, Christopher and his family explored Rollins’ architectural beauty and lively campus life. They sat in the plush red-velvet chairs of the Annie Russell Theatre and Christopher made a shot on one of the school’s basketball courts.

Sueheily Rivera says she always wanted to be an actress, but her parents never took her seriously. She attended a technical school but couldn’t finish after she had Christopher and his two brothers. The news about a scholarship for Christopher at Rollins was overwhelming but also exciting.

“It's really, really cool,” she says. “It will be awesome for him and for the school to give this opportunity to him because I never got to go to college. … It means the world to me.”

Rollins doesn’t consider a student’s academic record before high school, but college administrators plan to meet periodically with Christopher through middle school and high school to make sure he’s on the right academic track for college. As long as Christopher gets a 3.0 in his core academic classes in high school and stays out of trouble, school officials say he’ll be “automatically admitted to Rollins and will qualify for a full scholarship to Rollins that covers the full cost of tuition, room, board and books."

The college’s staff was deeply impacted by the Florida Project, including its president, Grant Cornwell, says Brandy Fransen, senior associate director of international admission at Rollins.

“I had no idea that the national average of homeless [children] is one in 40, but in Orlando, it's one in 17,” Fransen says. “I think to me what stood out was the disparity between an incredible place like Disney World and then in the backyard is complete opposite to what you think is there.”

Kevin Chinoy, one of the producers of the film, says meeting motel families put “a real human stamp” on the problems created by a lack of affordable housing here and nationwide.

“Some families of seven are living in small motel rooms,” Chinoy says. “You get to know enough of these people, and it's almost overwhelming at times to think about some of the challenges that they face. We take for granted some of the things we have in our own lives and you see this problem face up like that – it's impactful.”

The creators of The Florida Project wanted to make a film that would not only bring the issue of motel kids to the forefront, but also help that community in the process. A portion of digital sales from the film went to the Community Hope Center, a Kissimmee charity helping homeless families. Chinoy has been working with the Center’s executive director, the Rev. Mary Lee Downey, to develop her project for affordable intention-based living.

“There's three elements to the way we want to give back as we focus on this problem,” Chinoy says. “We want to help the people who we actively worked with in the movie. We want to try to do something specifically within the Kissimmee area, and try to bring attention to it on a national level. So, Sean has also been presenting at conferences and really speaking out on the issue of affordable housing, because again, this is not just a problem here. This is a problem pervasive really throughout the world.”

Chinoy says Christopher and the other kids are more than just actors – they’ve become part of each other’s families. Chinoy’s own son has bonded with Christopher while on set and they’ve gone to Disney together.

“One of the things we say is when you make a movie, you live with it for life,” Chinoy says. “And in this particular case, these are relationships that we'll have for the rest of our lives. … We intend to stick around and try to do what we can to help these kids grow – because they're great kids.”

Christopher says he thought he was going to meet his idol Tom Cruise when he was called to Rollins, but getting a scholarship was pretty cool, too. By the end of the tour last week, the 10-year-old announced he’d made a decision.