More than two dozen Florida legislators, all rated A or A-plus by the NRA, are running unopposed for re-election, but a national, progressive-friendly group has a message for them: It won’t come easy this time.

Run for Something, a group that bills itself as dedicated to supporting progressive candidates for state and local office, took out a full-age ad in the Sunday edition of the South Florida Sun-Sentinel calling on Floridians to run against NRA-backed state lawmakers in the upcoming 2018 elections.

“These 25 state legislators are running unopposed this November – and they’re complicit in the gun violence in our community,” the ad reads. “Hold them accountable. Run against them. We will help you.”

Run for Something, a political action committee, was founded by former Hillary Clinton campaign staffer Amanda Litman with the idea of funding and supporting young, progressive candidates for elected offices.

“Donald Trump is president, so throw everything you know about politics out the window,” Run For Something’s website reads. “You’re qualified to run for local office – we’re here to help.”

The ad is pictured below: 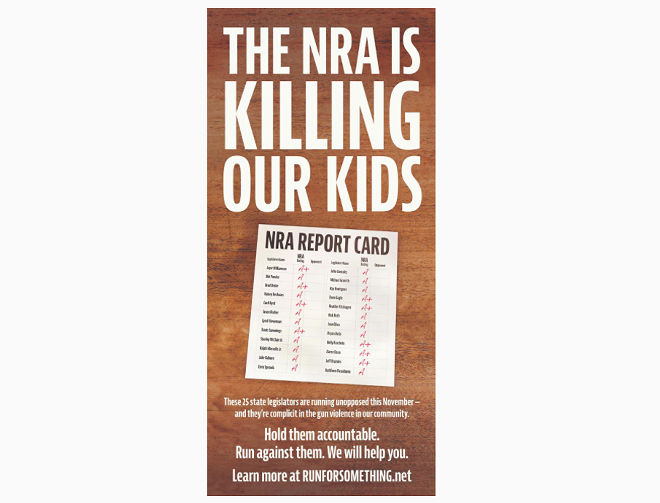