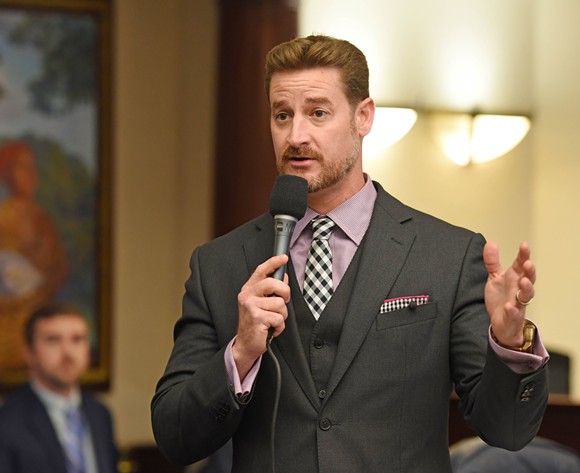 Florida Sen. Greg Steube, who's made a career out of filing NRA-backed proposals no matter how asinine they might be, announced Monday he's running for Congress.

The Sarasota Herald-Tribune reports Steube, R-Sarasota, will file to run for U.S. Rep. Tom Rooney's seat in District 17. Rooney, also a Republican, announced earlier this month that he would not seek re-election.

"As a pro-life, pro-Second Amendment, anti-illegal immigration fighter for our constitutional rights I will proudly support Trump and his agenda in Washington," Steube said in announcing his campaign Monday.

During his time in the Florida Legislature, Steube has been most known trying to make NRA lobbyist Marion Hammer's dreams a reality. Steube has pushed a bill to make sure concealed-carry permit-holders can bring guns into college campuses, schools, local government meetings and airport passenger terminals – even in the aftermath of a mass shooting at the Fort Lauderdale-Hollywood International Airport where a gunman killed five people. The Sarasota Republican has also backed a measure to hold private businesses liable if they ban concealed-weapons license holders from bringing guns onto their property and the license holder is injured by a person or animal. A similar bill would allow people with concealed-weapons to sue gun-banning businesses if they're the victims of a shooting at that location.

Steube, though, hasn't had much luck in getting his bills passed, which is pretty surprising given that Republicans control the Florida Legislature. But hey, good luck taking that ineffective streak to Washington, a place that Steube calls "broken."