7,000-year-old ancient burial site found off the coast of Florida 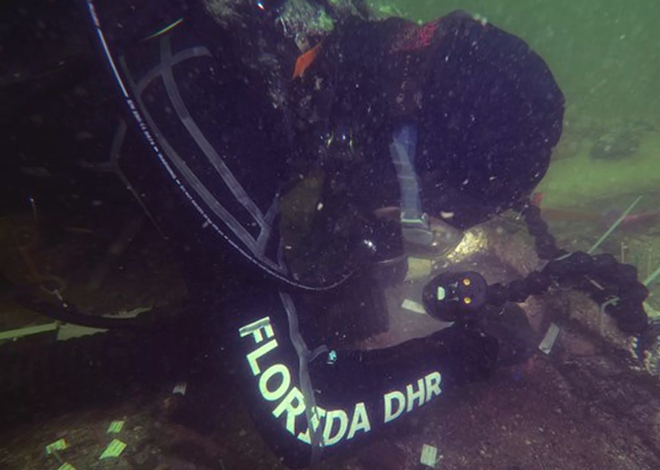 While swimming roughly 300 yards off the coast of Venice, divers with Florida’s Bureau of Archaeological Research discovered an ancient Native American burial site estimated to be 7,000 years old, announced the Florida Department of State.

The Manasota Key Offshore archaeological site, which is 21 feet under water and spans about an acre, dates back to the Early Archaic Period and would've been located farther inland back when Florida's fluctuating coastline would have extended farther out into the Gulf of Mexico.

Because digging up ancient burial grounds has never turned out well for anyone, scientists say they will leave the remains were they are.

"Out of respect for the ancient people buried there and their living descendants, divers and other interested individuals are prohibited from disturbing the site. The site is protected under Florida law and it is illegal to excavate and/or remove any material or human remains from the site," reads a statement from the Florida Department of State’s Bureau of Archaeological Research.

This is what would have been considered a "bog burial site," where ancient people buried their dead in a shallow peat pond. Archaeologists are particularly excited about this sight because peat preserves remains so well, and they will be able to learn about Florida's ancient people.

A similar site to this one was found off Cape Canaveral in the '80s where they found about 160 bodies, some of them still with preserved brains.

"Seeing a 7,000-year-old site that is so well preserved in the Gulf of Mexico is awe inspiring. We are truly humbled by this experience," says Dr. Ryan Duggins, Underwater Archaeology Supervisor for the Bureau of Archeological Research. "It is important to remember that this is a burial site and must be treated with the utmost respect. We now know that this type of site exists on the continental shelf. This will forever change the way we approach offshore archaeology."