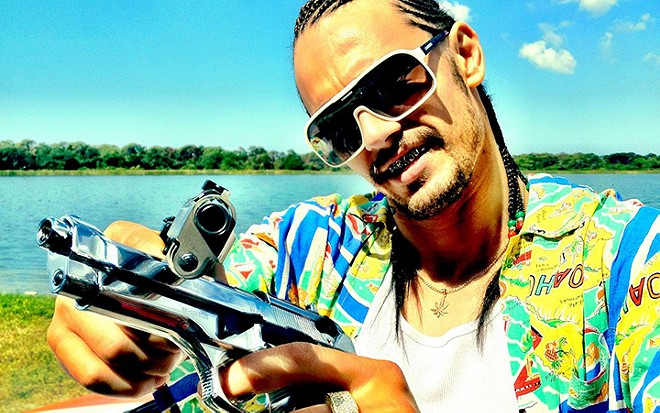 Here’s an inspired double feature for you. Sunday afternoon, Uncomfortable Brunch screens Spring Breakers, a breakneck spree of sex, drugs and crime from noted indie squirm-inducer Harmony Korine. Along with former Disney Channel tween stars Selena Gomez and Vanessa Hudgens playing gun-toting co-eds, the film stars a chameleonic James Franco as a drug dealer named Alien. The cornrowed, grill-sporting Alien drew immediate comparisons to cult rapper Riff Raff since – uh – he looks and sounds exactly like Riff Raff. But Korine and Franco both claim that the character is actually based on since-incarcerated St. Pete rapper Dangeruss. Riff Raff himself disagreed, threatening to file a lawsuit and even mocking Franco by playing a character named Jamie Franko on soap opera One Life to Live – a send-up of Franco’s time on General Hospital. Still with us? This Sunday, you can create your own informed opinion, since Riff Raff plays Soundbar mere hours after the screening of Spring Breakers. Judge for yourself.