Band of the Week: Dancing Bones 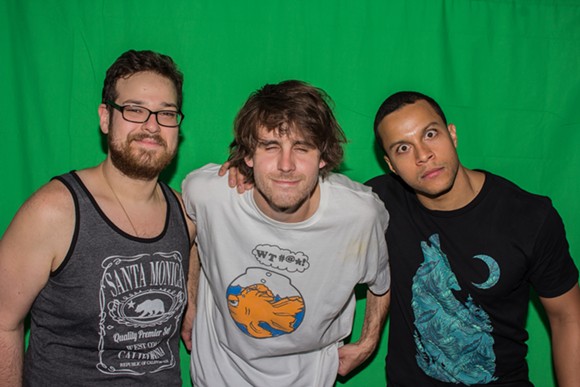 Welcome to Orlando Weekly's "Band of the Week." Every week, we highlight one of our favorite local bands. This week, we're pleased to bring you Dancing Bones.

Dancing Bones are playing Punk on the Patio at 64 North on Tuesday, March 6 and at Uncle Lou's on Saturday, March 10.

When did the band form?
The Dancing Bones formed in early 2015 while our guitarist was at UCF. There have been some lineup changes since then. Dave joined on the bass in Summer 2016, and Leo joined on the drums in February 2017. In the last year we’ve been playing out consistently, and the chemistry is great!

Currently available releases:
We have an album from 2016 called Notapunk. You can listen to it on our band’s website or on Spotify.

What has been your most memorable show so far?
We hosted a house show where we played with Bubble Boys and Laghima last November. We got a whole bunch of people packed into our tiny rehearsal space at Dave’s house, and after the show we let anybody jump in and jam. I remember it being one of the first times I really felt engaged with a crowd that was dancing and singing along. I was on Cloud 9 for like a week, thinking, “Yea, we made that happen...”

Which local band is your favorite one to play a show with?
Our favorite would probably be Bubble Boys. We’ve played a handful of shows with them at this point. We really like their energy, and their songs are so easy to dance to.

What description gets used for your band that you would most
like to correct people on? Why?
That’s a tough question. We’re not really sure. We just write songs and hope people get their kicks when they turn up at our shows.

What’s your favorite thing about being an Orlando band? What's your least favorite? Why?
Our favorite thing about being an Orlando band is Orlando’s awesome underground music and art community. There are a lot of great people whom we idolize doing good work to support local music. Events like Punk On The Patio and groups that give local bands the chance to open for touring acts really give the Orlando underground the chance to grow on it’s own. The people doing these things are people we really admire and, in some cases, have gotten to know pretty well. It’s really a special thing when your friends become your idols, or when your idols become your friends. Sometimes it’s tough to tell which happens first.

Our least favorite thing is that Orlando’s musical identity is still not as established as other cities’. A couple years ago I visited Austin, Texas, and it seemed like every bar, restaurant, or venue had live bands playing. Orlando doesn’t have nearly that many venues booking bands so when places like Spacebar or the Red Lion Pub close, local bands really feel it. Still, it’s way cooler building your own live music culture than relocating to a place that already has one in full swing.

Any big news to share?
Maybe some new recordings this summer...

The Heard band of the week dancing bones