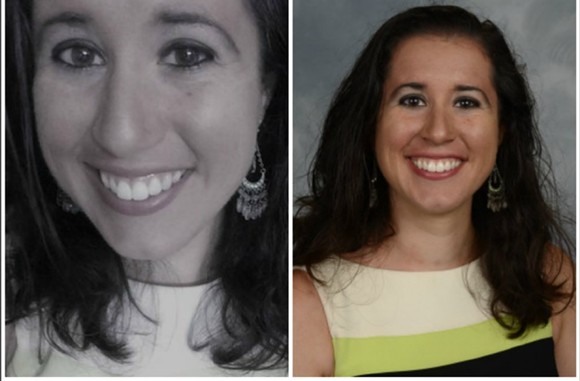 The school’s investigation into Volitich’s alleged extracurricular activities began on Friday, after HuffPost brought it to school administration officials’ attention that the teacher, along with what appeared to be her views as a white nationalist, “shared anti-Semitic conspiracy theories and suggested that Muslims be removed from the planet,” HuffPost found.

HuffPost also reports that Volitich has been quick to brag about the influence of her racist views in a public school setting: In a Feb. 26 episode, “a guest railed against diversity in schools, dismissing the idea that ‘a kid from Nigeria and a kid who came from Sweden are supposed to learn exactly the same’ and have the ‘same IQ.’ Volitich enthusiastically agreed with the guest, and went on to argue that ‘science’ has proven that certain races are smarter than others."

By Sunday, Volitich had been “removed from the classroom,” according to a statement from Citrus County School District Superintendent Sandra Himmel.


On Friday, March 2, 2018 the Citrus County School District was made aware of a concerning podcast by a Huffington Post reporter. The reporter indicated they believed one of the persons participating in the podcast was a teacher at Crystal River Middle School. The Human Resources department was notified and an investigation was initiated immediately. The teacher has been removed from the classroom and the investigation is ongoing. Pursuant to Florida Statute an open investigation and materials related to it are exempt from public record and cannot be discussed until the investigation is complete.


Using her online pseudonym, Volitich reportedly stated that Islam “legitimizes” terrorist behavior and that terrorist-influenced attacks will not cease to stop “until we eradicate [Muslims] from the face of the earth.”

Going further, Volitich also made a habit of retweeting and commenting on tweets by known neo-Nazis, anti-Semites and white supremacists, including, but not limited to, Kevin MacDonald, David Duke, Arthur Jones, Patrick Casey, Mark Collett and Mike Peinovich, also known as Mike Enoch.

But even with a mountain of evidence stacked against Volitich, in a statement to WFLA News on Sunday, she claimed her actions were purely “satire,” and were not meant to be taken seriously. She said:


“None of the statements released about my being a white nationalist or white supremacist have any truth to them, nor are my political beliefs injected into my teaching of social studies curriculum. While operating under the Russian pseudonym ‘Tiana Dalichov’ on social media and the Unapologetic Podcast, I employed political satire and exaggeration, mainly to the end of attracting listeners and followers, and generating conversation about the content discussed between myself and my guests. The views ‘Tiana Dalichov’ espouses do not pervade my professional career. As an adult, my decisions are my own, and my family has nothing whatsoever to do with my social media accounts or my podcast. From them, I humbly ask for forgiveness, as it was never my intention to cause them grief while engaging in a hobby on my personal time. All future questions about the current situation should be directed to my attorney. I cannot comment further, due to the ongoing school board investigation.”


Her tweets as “Tiana Dalichov” suggest otherwise, however: