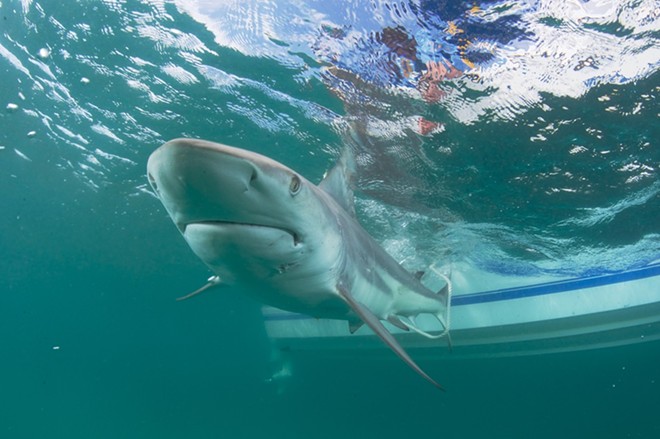 College students aren't the only ones heading down south for spring break.

According to Florida Atlantic University, thousands of blacktip sharks are heading south for warmer water during their annual migration off Florida’s southeast coast. The trek is considered to be the largest migration in U.S. coastal waters.

For the last eight years, Stephen Kajiura, Ph.D., a shark researcher at the university, and his team have been observing and tracking these "snowbirds of the sea," using a boat, a plane, acoustic monitoring devices and even drones to report the sharks' travels in real time.

In previous years, the researchers have reported as many as 15,000 sharks trekking down the coastline at any given time. However, blacktip shark numbers have declined. "Last year, we saw a dramatic decline in the number of blacktip sharks that migrated south. In fact, it was so low that we estimated the population to be about one-third of what we have seen in previous years," said Kajiura. "We want to make sure that these snowbirds come back to South Florida, because if they don’t, it will have a huge ecological impact in this region."

Monitoring the migration patterns of blacktip sharks is not just about public safety, it’s also about ocean health, according to FAU. They sweep through the waters and "spring clean," as they eat the weak and sick fish species helping to preserve coral reefs and seagrasses along the way.

The sharks have been known to come down south during the winter months  and head back up north when the water starts to warm up.

Researchers said water temperatures will decide where exactly these blacktip sharks set up shop for the next couple months.