Will the young hero of 'A Wrinkle in Time' echo the Meg Murry beloved by generations of readers? 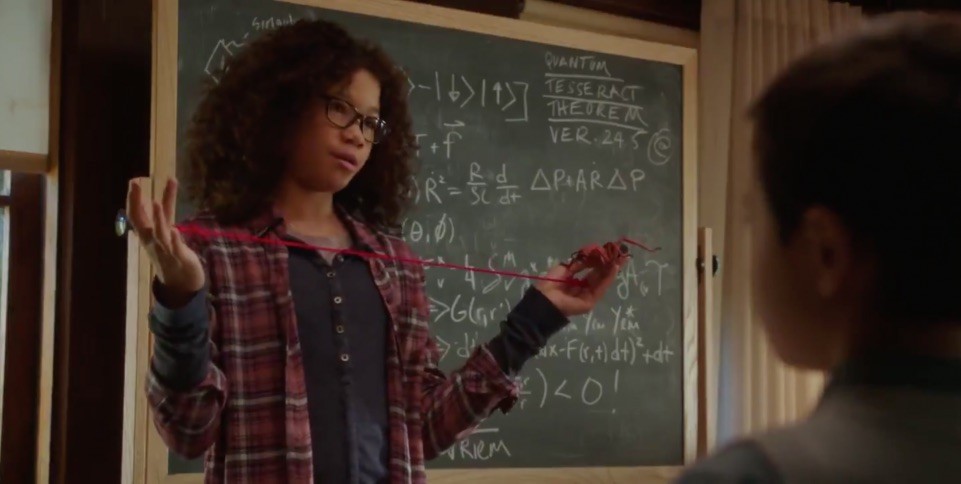 Meg Murry sucks at school. She gets in fights. She talks back to adults. She’s “repulsive-looking.” She’s contrary in every way to what Hollywood would call a hero, especially a female hero. All of this and more is why the upcoming A Wrinkle in Time movie due out this weekend will be judged in part for how it handles the necessary complexities of this particularly cherished YA heroine whose inner battles rage at the center of the classic story’s supernatural chaos. Readers want to know: Will the Meg Murry we see in the movie resemble the hero we loved in the book?

When readers first meet Meg, she’s wrapped in a patchwork quilt in her attic bedroom. There’s a hurricane rattling the roof, and its winds are shaking the walls around her. She’s never experienced anything like this before, and she’s scared. She has not even left Earth yet and she’s frozen there, weak. She begins to get irritated at her family for not checking on her, and she uses this anger to motivate herself to leave the room and seek safety. This is Meg’s M.O. She waits for anyone else to save the day, but then she gets impatient and takes impulsive action herself.

Anger is an emotion that comes easily to Meg, and A Wrinkle in Time author Madeleine L’Engle makes sure that the reader knows it’s because channeling this anger helps the young girl overcome more challenging feelings, like fear and pain. Meg’s feelings are attentively and painstakingly explained throughout the book, with shifts in her mood often serving as powerful foreshadowing, encouraging the reader to pay even more specific attention to the brace-faced teenage tempest who is so quick to anger. It’s a key part of her being, and in the end, readers understand that learning how to fight it back is what prepares Meg for her ultimate battle with IT in the end.

Yet in trailers for A Wrinkle in Time, these flaws that form the core of Meg’s strengths in the book seem washed away in preference for more familiar Hollywood storytelling devices. In these trailers we see Meg (played by Storm Reid) not fitting in at school, sure, but it becomes immediately clear that the story’s already been modified so that it seems that Meg knows more about her father’s mission going in. This is in serious contrast with the Meg we saw in the book, who is always in the dark (and then made to fight the dark evil the Black Thing).

It’s unclear if the movie will retain this sense of Meg’s coming-of-age story, even though audiences lately have shown they are clamoring for stories like hers.

Related YA sci-fi is supposed to make us question society: Is the current crop of young adult dystopian lit holding up its end of the bargain?

YA sci-fi is supposed to make us question society
Is the current crop of young adult dystopian lit holding up its end of the bargain?
By Ashley Belanger
Books

There’s an idea beautifully laced into A Wrinkle in Time that rushing things ruins things. If wisdom comes with age, as the glorious beings Mrs. Who, Mrs. Which and Mrs. Whatsit suggest, then the opposite of an eternity of experience is perhaps the instant it takes Meg to anger.

Meg as a teen is in many ways stuck in between: She’s awkward and not beautiful, though her mother suggests she will be; she’s smart, but not deeply intuitive like Charles Wallace or Calvin; and she’s impatient to understand everything now. She unfavorably compares herself to everyone, from her own mother to the sightless alien beings like Aunt Beast on Ixchel. To watch Meg Murry climb out of her insecurities as L’Engle designed her escape route in the book would be some real movie magic.

That’s why it’s disappointing to see the trailer and preliminary press suggest that Meg’s turning point in the movie depends on her discovering a “warrior” state of mind that seems more akin to a Wonder Woman transformation than the more Lady Bird-like story at the heart of the book.

In an interview with the New York Times, director Ava DuVernay says she thought of Meg as “just a regular kid who finds her potential,” but Reid calls her character “a superhero.” “She is an African-American girl that is smart, that is beautiful and that basically realizes that she is enough,” Reid says. With that realization, “she just taps into her superpowers to be able to save her dad, her brother and save the world.” In the same way that Mrs Who, Mrs Whatsit and Mrs Which, who range from matronly to elderly to almost invisible in the book, become glamorous goddesses in the movie, it seems that the filmic Meg overcomes her flaws rather than realizing that in them lies her strength.

Time will tell how much the hero may change once the movie hits theaters this weekend. In the meantime, we know where Meg stands: “Maybe I don’t like being different,” Meg says in the book, “but I don’t want to be like everybody else, either.”