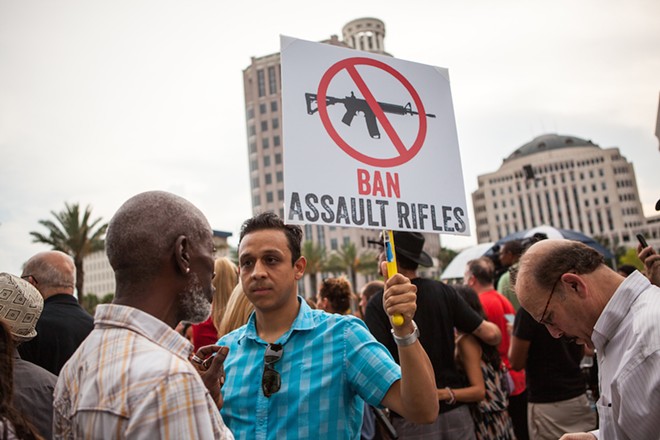 Today, Orange County commissioners will vote on a measure that would essentially militarize our public schools.

This afternoon, Orange County commissioners will decide if it's a good idea to allow public school resource officers to carry a $1,600 military-grade assault rifle called an M4.

Besides already having an extra deputy stationed at every county school since the shooting in Parkland, Florida, the commissioners will vote on whether or not to also give $250,000 to the Orange County Sheriff's Office to purchase 150 of these weapons for every officer, including school resource officers.

If you're unfamiliar with an M4, the weapon has been used by the U.S. military since the 1960s, and is designed to obliterate targets by firing high-velocity rounds that are fully capable of penetrating through doors, walls and even multiple people.

Dr. Dan Pronk, who served as a Special Operations doctor, stated in a Business Insider article that he would rather be shot by an AK-47 than an M4 based on the sheer force of the bullets, which cause far worse damage to tissue because of the "pressure wave of the temporary cavitation."

To demonstrate this, here's a slow-motion video showing a 5.56x45mm round (same as what the M4 fires) hitting ballistic gelatin in slow motion.

Now imagine 82 percent of these bullets missing their targets in a classroom or crowded hallway, because this is what will actually happen.

A study spanning from 1988 to 2006 from the Internal Journal of Police Science and Management found that trained officers with the New York City Police Department, the nation's largest police department, only hit their targets 18 percent of the time when involved in a gunfight.

Florida senator says only 'thoughts and prayers' will stop mass shootings
By Monivette Cordeiro
Blogs
"The results of this study demonstrated that individuals who had completed standard law enforcement academy firearms training were not more accurate in their shooting than those who had not had any law enforcement handgun training," reads the study.

Capt. Carlos Torres from the Orange County Sheriff's Office told WTFV this week that he wants officers carrying these rifles at all times, rather than keeping them locked in a secure safe. "We've seen where we've had these incidents, and now I think it's more acceptable." said Torres to the station. "Remember, time is of the essence when these things happen."

Yes, things do happen. However, having police officers, teachers, janitors or literally anyone engaging in crossfire situations in schools is an awful idea, and it's an even worse idea to introduce weapons that can such terrible damage, considering how likely "the good guys" are to miss their targets.

Here's a much simpler idea: Maybe just make it nearly impossible for a 19-year-old with a troubled past to buy weapons of war in the first place.