Just an alligator strolling through a strip mall in Flagler Beach 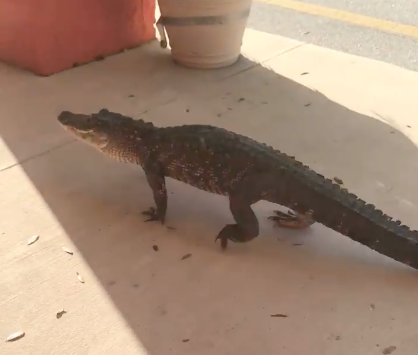 Here in Florida, if you look hard enough, you can pretty much find a gator just about anywhere.

However, finding one at a strip mall isn't that common. That's exactly what happened Monday morning when Denise Nichols-Gearhardt spotted a gator taking a stroll by the Junque in the Trunk antiques store in Flagler Beach.

"Just a typical day at work in Florida! He was digging the antiques but really wanted a donut," wrote Nichols-Gearhardt in a Facebook post.

According to WESH, police were called to the area and kept people a safe distance away until the gator was able to make it to a pond nearby.

Spring is gator mating season, which typically runs between April and June. This means gators are more active, and sightings like this will become more common. Be sure to check your pools before you dive in.