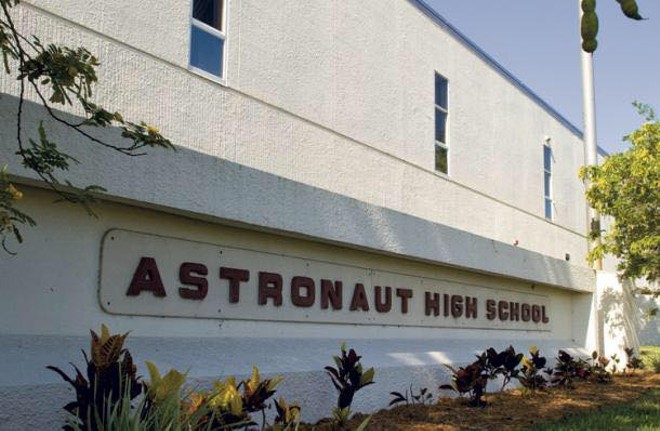 Parents of students at Astronaut High School in Titusville are only just learning that two 17-year-old male students were expelled last year after threatening to attack the school, Florida Today reports.

The public was informed of the incident when parents received an automated phone call earlier this week. The call stated that the two male students had intended to carry out their threat on Jan. 10, 2017, just more than a year before 19-year-old Nikolas Cruz stormed into his former high school in Parkland, killing 14 students and three faculty members. School officials admitted they didn't disclose the threat sooner due to an active police investigation, the report continues.

Following the school district’s typical introduction of “Good afternoon, War Eagle families,” the automated message reportedly said, “Through strong relationships between our teachers and students, as well as the Titusville PD, detectives acted promptly which resulted in the arrest of two students who had allegedly conspired to harm our students.”

However, according to Florida Today, what the call failed to do was inform families that the plot was nearly missed by school officials when word first broke of a potential incident. If not for a tip to police from an art teacher’s spouse, the situation might have ended differently.

The art teacher, as well as a number of the two male students’ classmates, initially informed the school’s administrative staff.

The two male students had what authorities called the “clear ability” to carry out an attack on Astronaut High. One of the boys even had what authorities called an “arsenal” hidden in his bedroom: According to police records obtained by Florida Today, it included .22-caliber rifles, a .380 pistol, loaded magazines, homemade axes, knives, machetes, improvised gas masks and bulletproof vests.

School officials reportedly say they neglected to inform parents about the narrow miss because “we were asked by law enforcement not to publicly disclose anything during their open investigation.”

Per the police report, Florida Today found that one of the students told his classmates that he was going to shoot his art teacher and hide explosives in the classroom. The student was later cleared of any suspicions following an internal investigation by the school, which consisted of a few hours of questioning by the school’s guidance counselor.

School officials and the security resource officer were reportedly not alerted to the incident at the time.

After mentioning the situation to her spouse, the art teacher’s husband – neither his name nor his spouse's were included in Florida Today’s report – alerted the Titusville Police Department from there.

Both teens were expelled from Astronaut High and face arrest if they step on Brevard Public Schools property.