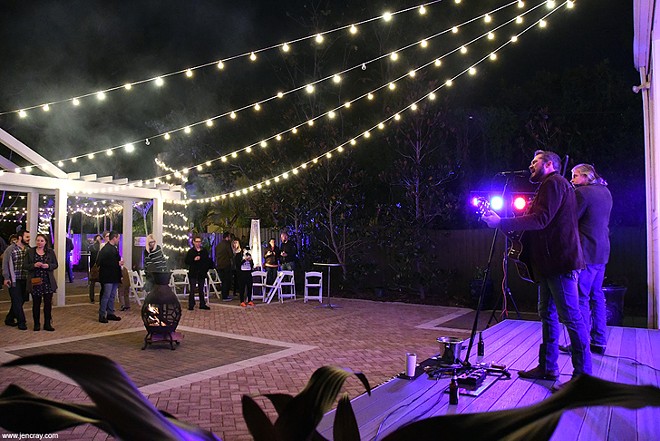 Last week, I reported the recent concert tremors coming from, of all places, Thornton Park. Specifically, some notable indie promoters on the Orlando scene (like Norsekorea Presents, Endoxa Booking, For Your Friends Booking) have activated the Abbey in ways seldom seen before with a string of very noteworthy shows, suddenly making the diverse yet decidedly non-rock live venue something of a new magnet. Before that, the Falcon has long been the lone beacon for real live music in the often tony downtown quarter.

Now, live music in Thornton Park – a district defined more by dining and drinking leisure than rocking – might actually become a thing with the fresh, potentially cumulative addition of the Veranda Live.

The new show spot is the concert face of the Veranda at Thornton Park, an events venue known more for weddings and the like. Its bid to get into the music game recently launched on Feb. 22 with a spring concert series that features free shows every Thursday and Saturday.

Noteworthy is that the stage is being booked by experienced promoter Modern Music Movement, which has been behind shows like the Nashville South showcases and others at spots like the Social, Will’s Pub and the Imperial.

What distinguishes the Veranda Live is that, rather than the usual nightclub setup, it presents music outdoors in the kind of picturesque historic downtown courtyard setting that people pay lots of money to rent for events at places like this and Courtyard at Lake Lucerne. This alone makes it an alluring option for those still interested in enjoying live music but are jaded on the bar scene. 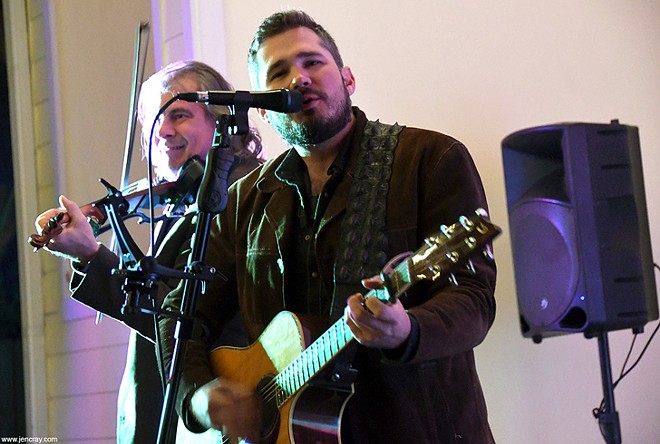 For those reading between the lines, yes, the music featured here skews less raucous than perhaps you’d see at a rock club, like genteel country artist Sean Holcomb, who did a nice performance with fiddler John Zerrip on the night I went. But don’t go thinking this is some acoustic coffeehouse deal either. There are indeed acts lined up that can keep it on the intimate tip like Heather Lee & Jordan Wynn (Mar. 24) and Terri Binion and Juno Smile (Apr. 19). However, there are also full-band performances coming up by classic honky-tonk combo Giddy Up Go (Mar. 31), legendary garage-rock gang the Hatebombs and heavy blues-rockers the Ludes (both together on Apr. 7), who are the exact opposite of subdued.

Concerts take place in the commons of the historic events complex, where there’s a nice bandshell with new, built-out stage. The courtyard has a generous 500-person capacity but maintains a nice, warm scale under the string lights and tree canopy. And there’s full beer, wine and liquor service by OG downtown craft cocktail bar the Courtesy.

The shows are free, all ages and occur within a very reasonable time frame (it’s in a real neighborhood so the 10:00 pm noise curfew must be observed). This should be a godsend for those looking for live music but not an all-night rager. However, though the music ends when the night’s still viable, the party doesn’t necessarily stop since the bar remains open past for those who want to hang and keep the vibe going.

Speaking of vibe, ambiance is something that this venue naturally has like few do. Add in the fresh breath of live music and you’ve got completely new possibilities for one of downtown’s best neighborhoods. In action, the Veranda Live opens up this prized space to the public for a musical gathering that, in effect, transforms it into the buzzing town square of Thornton Park for the night. And the results are pretty magical.

Bottom line, seeing music at the Veranda Live is nothing like a club or bar show. And that’s exactly what makes it a high-value addition and an experience to check out. With continued quality booking, the Veranda Live has the ingredients to become a true alternative in the city’s live music landscape.