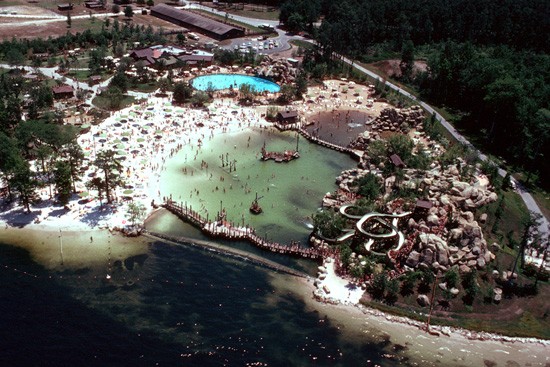 Even before River Country’s closure in 2001 there were rumors of what may be headed to this lakefront site. However, Disney recently filed paperwork that looks like after nearly two and half decades since the first announcement of a hotel on this site, they may actually be finally moving forward with the plans.

Over the years the project has been known as Wilderness Junction, Fort Wilderness Junction, and Buffalo Junction. The plans have shifted from the earliest ones that called for a 600-room, budget-friendly, old west-themed resort that would draw inspiration from the then under-construction Hotel Cheyenne at Disneyland Paris. The plans called for a wild west-themed town with its own dinner show venue, and numerous wild west activities, such as horse rides.

The plans were canceled as disappointing results from Euro Disney, now known as Disneyland Paris, began rolling in and Disney was shifting focus to its new hot ticket item, the Disney Vacation Club timeshare program. The dinner show was to be similar to Disneyland Paris's Buffalo Bill dinner show. That show is believed to be getting either a massive update or closing soon as part of an updating recently announced for Disney Village, the shopping and entertainment district at Disneyland Paris.

In 2014, plans were leaked for a new DVC resort on this site. This time the low budget wild west theme was replaced with an American wilderness lodge-style design that pulls more inspiration from the Wilderness Lodge than from the Fort Wilderness campground.

The new plans called for numerous five-story buildings, along with a lazy river pool area and a massive 400 space parking lot. Some documents leaked at the time showed a three-year construction timeline for the two-phase project.

By 2016, industry insider Jim Hill was stating that the development would begin within the next two to three years, stating that it would be the next big project after the bungalows at Wilderness Lodge open. Those over-the-water villas officially opened last summer. The new DVC resort would have a pool area that would be reminiscent of River Country, according to Hill.

Since 2016 there haven’t been any indications of the project moving forward until earlier this month when Disney filed paperwork with the water management district for land stability testing in wetland areas within this site. Only the areas within the wetlands specifically are mentioned in the new permit, but they indicate a much larger development is in the works.

One of the biggest concerns about the new DVC resort is transportation, but some, including Hill, have indicated that a redo of the area roadways would include both new roads through this area with a much larger TTC and off-site bus parking area for the Magic Kingdom nearby.

These two projects would likely be tied into the new resort’s construction timeline since new roads to access the resort location are required.

Another transit option goes back to the Buffalo Junction days, which called for a train system, similar to the one that called Fort Wilderness home between 1974 and 1979. The new train would link Fort Wilderness, the new hotel, and Wilderness Lodge. With the redo of the TTC and Magic Kingdom drop-off area, it’s possible the train could link to this, as well. Though there’s currently no indication that the train aspect of the original plan has been revived.

It’s strongly believed that the new resort would feature bungalows similar to those at Wilderness Lodge and the Polynesian Resort. A new Electrical Water Pageant that would use drones and large floats similar to those found in Animal Kingdom’s Rivers of Light show is expected within the next few years, helping drive the desire for water views along Bay Lake and the Seven Seas Lagoon.

If the former three-year timeline is correct, we may see this new resort opening as part of the 50th Anniversary of WDW in 2021, though a timeline with a mid-2020 opening seems more reasonable considering the large number of construction projects already underway all across Disney World.