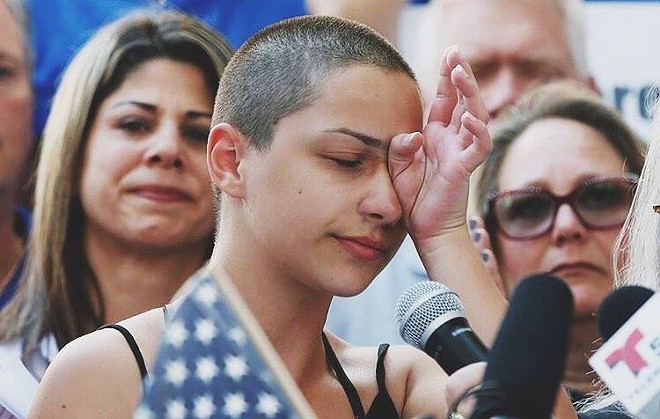 “The students of MSD who are here tonight along with myself would very much appreciate it if we could start out with a moment of silence for both the shooting at our school and for [Orlando nightclub] Pulse,” said González, GSA president, as she accepted the award.

She continued: “We lost 14 classmates, three faculty members, and there were plenty of individuals who were injured and are still in the hospital due to the havoc wreaked on Valentine’s Day in a period of six minutes. It’s important that we remember these individuals when we fight for gun safety and gun control as well as all other individuals affected by gun violence in America.”

“The MSD students who are here tonight are very thankful and humbled that our GSA, its sponsors and outspoken members of the club are being honored by Equality Florida. Many of the members of our GSA this year have for the first time found a place where they can be themselves freely, can experiment with names and labels and learning about a culture that is widely ignored in textbooks and curriculum.”

“It is for us a combination of the oppression faced in the LGBT Plus community, being students who are told to listen rather than to speak, the unsatisfyingly short periods of time in which we are allowed to be our true selves, and a million other reasons that have contributed to us jamming our feet in the door of the media and refusing to stand back in this time of senseless tragedy. Now that we know we have the power to call B.S., nothing can stand in our way of using it.”