So far, it's unknown exactly how many people were affected by the collapse, but authorities are saying five to six cars were crushed, and at least eight people have been transported to a nearby trauma center at Kendall Regional Medical Center.

The 950-ton bridge collapsed while cars were stopped underneath at a red light.

According to the Miami Herald, local doctors are currently being called to the scene and authorities are expecting "mass casualties." A spokeswoman with the Miami Police Department confirmed that six people are now declared dead. Five died at the scene and one died at the hospital.

"We are shocked and saddened about the tragic events unfolding at the FIU-Sweetwater Bridge," said FIU spokesperson Maydel Santana-Bravo in a statement. "At this time, we are still involved in rescue efforts and gathering information. We are working closely with authorities and first responders on the scene. We will share updates as we have them."

just drove under the new FIU bridge before it collapsed on the road pic.twitter.com/zmHfB9Z143

Family and friends of the injured or killed are being gathered inside an unknown classroom at @FIU where they’ll meet with police chaplains. @MiamiHerald pic.twitter.com/AO3Cg3rXDu

Traffic in the area was reportedly light, since FIU students were on spring break this week.

The cause of the collapse is not clear, but the bridge was still under construction before it collapsed, with the main section just recently installed last Saturday.

The $14.2 million cable bridge was funded by the U.S Department of Transportation and was meant as a connector along the Tamiami Trail from FIU's campus to the estimated 4,000 students living in off-campus housing and dorms.

FIU tweeted about the new bridge installation last weekend and linked to a report that has since been taken down. However, a cached version of the article on FIU News can been seen here:

According to press material released by FIU, the "Instant bridge," as they referred to it, was designed by the school's own Accelerated Bridge Construction University Transportation Center and was meant as a safer and quicker design that would reduce construction time without disrupting traffic.

"FIU is about building bridges and student safety," said FIU President Mark Rosenberg Saturday. "This project accomplishes our mission beautifully. We are filled with pride and satisfaction at seeing this engineering feat come to life and connect our campus to the surrounding community where thousands of our students live."

The bridge was expected to be open to the public in 2019.

In a now-deleted post, BDI Construction Company tweeted that it was "thrilled to have performed structural monitoring" on the project on March 12. 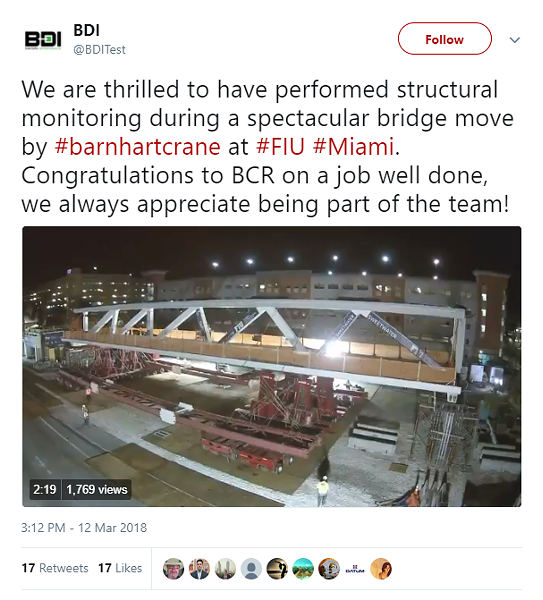 Munilla Construction Management (MCM ), one of the builders who oversaw the actual construction of the bridge last weekend, tweeted roughly an hour and a half before the collapse about the "special moment."

The story linked in the tweet has since been taken down.

On Sat., the local community gathered to watch the 950-ton @FIU Pedestrian Bridge move into place. In the crowd was FIU alumna & MCM's Project Exec. Leonor Flores, who got to share her work with her family. @FIUnews shares more about the special moment: https://t.co/1m5ek5NjOf


MCM posted a message to the company’s Facebook page this afternoon offering their thoughts and prayers, and promising a "full investigation into what went wrong."

The other construction company involved with the bridge was the Figg Bridge Group, which also worked on projects like the Sunshine Skyway Bridge in Tampa.

Figg has since released a statement to the Fort Myers News-Press. "Our deepest sympathies are with all those affected by this accident. We will fully cooperate with every appropriate authority in reviewing what happened and why. In our 40-year history, nothing like this has ever happened before. Our entire team mourns the loss of life and injuries associated with this devastating tragedy, and our prayers go out to all involved," read the statement.

According to the Miami New Times, both Figg and MCM have been accused of unsafe practices in the past, including another incident where a bridge collapsed on workers.

This is a breaking story, and we'll update when more information is available.