Kirk Herbstreit says UCF should get over self-proclaimed 'national championship' 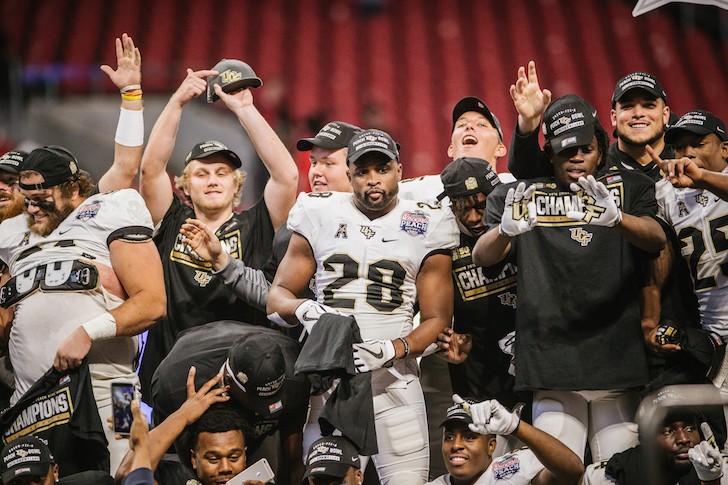 Just enjoy a magical-incredible year. You’re damaging your own brand by jumping up and down “claiming” a National Championship. Just stop. Your “National Champions” in your own world. And that’s awesome. But the rest of us crowned Bama the champ January 8th. https://t.co/Lblv7dEp8p


The strange saga of UCF’s pseudo-national championship began after the Knights capped off their 2017 season with a win over Auburn University in the Chick-Fil-A Peach Bowl on New Year’s Day, in a stunning 34-27 finish.

From there, UCF athletic director Danny White led the charge, proclaiming his team as the best in the land days before the actual College Football Playoff championship game between the University of Georgia and the University of Alabama actually took place. Echoing White’s sentiment, national championship banners began popping up around Orlando, in places like Wall Street Plaza and UCF's practice facility. Going even further into the mist of gray-area reality – at least more than usual – the Florida House then unanimously passed a bill that approved a “UCF National Champions” license plate.

In all, it was a textbook example of the post-truth era. It still is, judging by UCF fans’ reactions to Herbstreit's comment and continuing hype on Twitter:

Kirk, you and your employer have no integrity.
UNDEFEATED NATIONAL CHAMPS. If people didn't agree, you wouldn't be whining about it.

Just like Trump to not have the true National Champs, @UCF_Football to the White House. #ThePeoplesChamp #Undefeated https://t.co/xnREzg8PLI