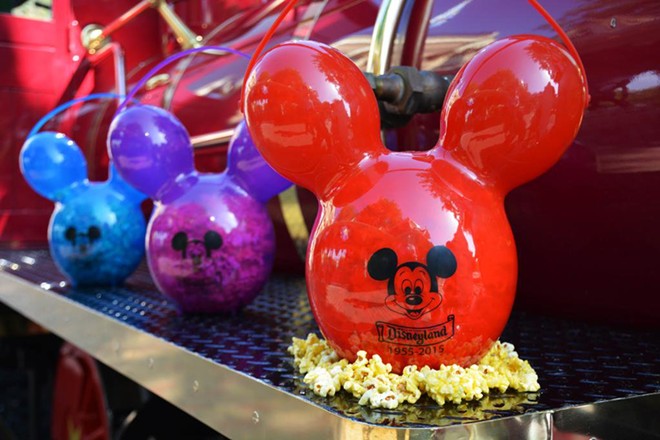 The price of food at Disney theme parks, or really any theme park, makes the prices at even the outrageous movie theaters look reasonable. If the scents aren’t enough to convince guests to buy the overpriced popcorn, then the specialty popcorn buckets likely will be. Over the years the buckets have become more and more detailed, and many fans have turned the food containers into prized collectibles.

In June of 2016, the buckets took off when a refillable popcorn option was rolled out both in Disneyland and here in Orlando. The buckets range in price, with some topping over $20 while most are around $15. Refills debuted at $1.50 and are now $1.75, and are good for the same day as the bucket purchase. The cheap refills and unique designs made the buckets an excellent collectible, causing their popularity to quickly grow.

By the end of last year, the trend had gone mainstream with Star Wars fans lining up for a Star Wars AT-AT-themed bucket and Travel & Leisure declaring the “hottest souvenir” of the Christmas season a Pluto-themed one.

But even with the lines for the new buckets longer than some for rides, one of the most popular popcorn buckets wasn’t available here in Orlando. Since they debuted as part of Disneyland’s 60th Anniversary in 2015, the Mickey Balloon Popcorn Buckets have been a huge hit. The buckets are shaped to look exactly like the Mickey shaped interior balloon and come in three colors. Now, after three years, the Mickey Balloon Popcorn Buckets have debuted here in Orlando.

Currently, the buckets here only come in red and are only being sold for $15 at the popcorn stand in Liberty Square in the Magic Kingdom. According to Disney World news site, Chip and Co. purple buckets may be debuting soon.

There's no word yet on whether other colors will debut or how long the buckets will be sold here in Florida. If you want one of the popcorn buckets but you don't want to deal with the record number of Brazilian tourists at the Magic Kingdom, you can also buy the buckets via Amazon, but you'll have to provide your own popcorn.