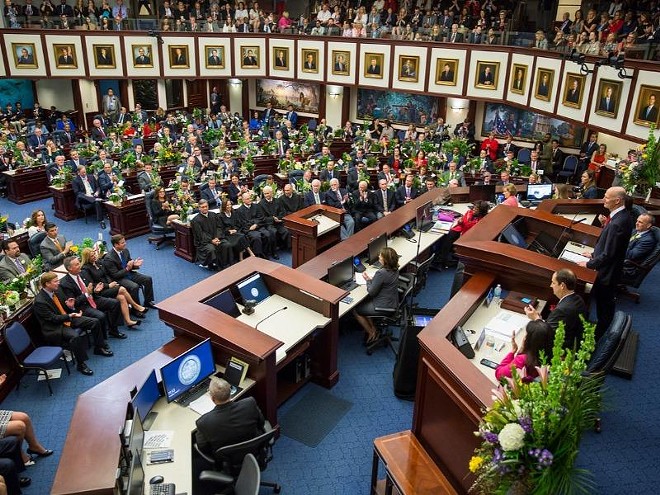 With a light touch of his veto pen, Gov. Rick Scott on Friday signed a new $88.7 billion state budget, eliminating only $64 million in spending and projects, the lowest total of his seven-plus years as governor.

“Today, Florida is strong, and I am proud of our hard work over the past seven years to grow the economy, invest in education, protect the environment and keep our families safe,” Scott said in a budget message.

He said his final budget as governor “will continue to advance the priorities of Florida families for years to come and keep Florida’s future strong.”

Scott wasted little time in dealing with the budget, which was passed by the House and Senate on Sunday and delivered to him Wednesday. The budget will take effect July 1.

His $64 million in vetoes was lower than the $69 million he eliminated in 2014, when he was running for re-election. Scott, a Republican, is considering a run for the U.S. Senate this year against Bill Nelson, the Democratic incumbent. This year’s vetoes represent a little more than 10 percent of the $615 million Scott eliminated in his first year in office in 2011, his high mark for vetoed spending.

But rather than focus on the vetoes Friday, Scott emphasized the spending initiatives in the new budget, as well as a tax-cut package that includes sales-tax “holidays” and a slight reduction in a commercial-lease tax. The budget plan also avoided $377 million in increased property taxes for schools because lawmakers decided to roll back a tax rate.

In an interview Friday with The News Service of Florida, Senate President Joe Negron, R-Stuart, said he was pleased with the governor’s support for the Senate’s initiatives, including a $122 million increase in funding for Bright Futures college scholarships.

“I think the vetoes were very modest, and I’m grateful to the governor for his consideration of Senate priorities,” Negron said.

While Scott and Republican legislative leaders have touted the budget, the Florida Association of District School Superintendents this week asked Scott to call a special session to increase funding for the 67 school districts. Although the budget includes a $101.50 increase in per-student funding, the superintendents said districts, on average, would only see a 47-cent increase in basic funding per-student because much of the new money was targeted for mental health and safety issues following last month’s mass shooting at Marjory Stoneman Douglas High School in Broward County.

In signing the budget, Scott rejected that request, emphasizing the “record” level of funding for the kindergarten-through-high-school system, including a $485 million increase over the current year.

He also cited the $400 million school-safety initiative, which will increase funding for mental-health services, school resource officers and security improvements at schools after the Feb. 14 mass shooting that killed 17 people.

One area targeted by Scott in his vetoes was more than $29 million in local road projects, which Scott said were funded outside the Department of Transportation’s normal evaluation process. The largest veto was $7 million for a road project in Lake County.

He also eliminated $2.5 million for an airport project in the Miami-Dade County community of Opa-locka, an expenditure he said did not undergo the normal evaluation process.

Scott rejected an effort by lawmakers to force the Department of Health to return $15 million in funding for research related to Zika, a mosquito-borne disease that can cause birth defects. Scott said the money cannot be returned because it is “contractually obligated” for research efforts.

Scott also vetoed $5 million in funding for charter schools, noting the facilities are in line to receive more than $145 million as part of the state’s construction and maintenance program for schools.

In addition, Scott rejected funding for two studies that lawmakers approved in reaction to troubles encountered by motorists who evacuated ahead of Hurricane Irma last September.

He eliminated $1.5 million to study extending the Suncoast Parkway north to Georgia as an alternative to Interstate 75. Scott said the Department of Transportation could complete the work without the additional money.

He also vetoed $750,000 for the DOT to conduct at least three exercises by May 1 using contraflow lanes —- directing traffic on both sides of a highway to travel the same direction —- to determine if such operations could speed evacuations.

Scott wrote that “traffic engineers and experts, as well as law enforcement, have determined through experience, review, and simulation modeling that contraflow is not an effective disaster evacuation method.”

State transportation officials favor using road shoulders to provide additional lanes for fleeing motorists. A month ago, Scott backed his agency leaders by including the expansion of “emergency shoulder use” when he issued a series of post-storm directives to the Department of Transportation.

Scott also vetoed $270,000 to purchase a building that houses a “quilt museum” in Gilchrist County, an issue that became the subject of a brief floor debate in the House on the final day of the 2018 session.

Rep. Evan Jenne, D-Dania Beach, complained the money being spent for the building could be used for better purposes such as programs for disabled adults or senior citizens.

“Instead we’re going to spend that money on an empty quilt museum,” Jenne said.

Scott said he rejected the project because it did not go through an established review process.