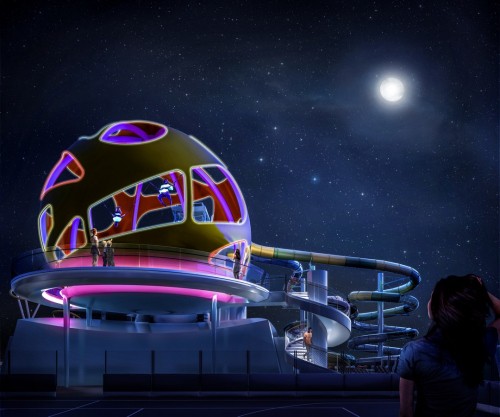 Royal Caribbean is already the largest cruise line in the world, when measured by total passenger capacity. However, the bragging rights will only grow when Symphony of the Seas, the world’s largest cruise ship, makes its maiden voyage at the end of this month.

Even with a new top-notch ship on the horizon, the Miami-based company is still adding upgrades to their other boats. Earlier this month Royal Caribbean announced $1.1 billion in upgrades in the latest attempt to keep both families and vacationing adults happy.

$900 million has been earmarked for upgrades to 10 ships, which is nearly half of Royal Caribbean’s fleet of 24 ships (not including the Symphony of the Seas). Called "Royal Amplified," the upgrades will debut on the Mariner of the Seas this summer when it comes out of its dry-dock after a $90 million update.

A new virtual reality-based bungee trampoline experience, called Sky Pad, which is set inside a giant egg-like structure placed near the water slides, will give the ship a new modern feature. Other updates include new glow-in-the-dark laser tag, an updated sports bar, a Playmakers and a retro-themed lounge called the Bamboo Room.

The Navigator of the Seas will receive upgrades similar to those of Mariner of the Seas, while also getting updates that will help it cater to its shorter itineraries.

The most dramatic of the ship upgrades might be the Oasis of the Seas, which will mark its 10th anniversary next year with a full top-to-bottom update that will bring in experiences similar to those of the Symphony of the Seas. The Allure of the Seas will receive these updates in 2020.

While the majority of the funding is going to ship upgrades, the thing that got the most attention has undoubtedly been Royal Caribbean’s upgrades to its privately leased island, CocoCay. The $200 million updates to the island, formerly known as Little Stirrup Cay, will be part of the Perfect Day marketing program by Royal Caribbean that they plan to roll out to other private islands.

The most prominent update to the island will be the pier, which will be completed by this fall. The new pier will mean Royal Caribbean passengers will no longer need to use a boat to access the island. Once on shore, the island will be home to tons of activities. Just on shore, near the pier, a large water park-like area themed to a shipwreck will have 30 water cannons and a water geyser that will shoot water eight stories into the air.

Other aquatic activities include a separate kid-friendly water fort that will house two drench buckets and five water slides, the largest freshwater pool in the Caribbean, with its own swim-up bar and numerous "islands" with in-water loungers, an infinity edge pool with its own bar, overwater cabanas with hammocks and private waterslides, and two separately themed beach areas, both with their own water activities, including boat tours and glass-bottom kayaking.

Zorbing (the giant inflatable hamster ball-like activity) will be offered at the South Beach along with soccer fields, paddleboarding, volleyball and basketball. A floating bar will be just offshore. 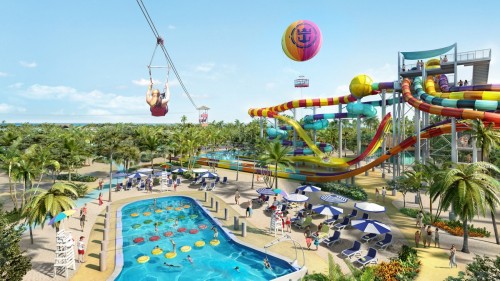 The Thrill Waterpark will be the largest waterpark in the Caribbean, with 13 slides across two towers and the largest water pool in the Caribbean. The signature slide of the waterpark will be Daredevil’s Peak, a 135-foot-tall waterslide, making it the tallest waterslide in North America, a claim currently held by Volcano Bay’s 125-foot-tall Ko’okiri Body Plunge. A 1,600-foot zip line will race overhead, and a kid-focused Adventure Pool will feature a rock-climbing wall as part of a water-focused obstacle course.

A helium balloon, similar to the Aerophile (formerly Characters in Flight) at Disney Springs, will take guests 450 feet into the air, giving what Royal Caribbean claims to the “highest vantage point in The Bahamas.” Riders will likely be able to see Nassau, which sits just 55 miles south of CocoCay.

Some environmentalists pushing back against Royal Caribbean’s plans for the island, which call for the dredging of the basin in order to accommodate its larger ships. Others fear that the focus on the island might mean other local islands, such as Nassau, might be skipped by Royal Caribbean, possibly due to safety concerns.

Crime has been a fear for cruise lines for years. In recent weeks, cruise lines, including Royal Caribbean, have canceled shore excursions in Cozumel after the U.S. State Department issued a travel alert. Explosives were recently found on two separate tourist ferries in Cozumel, and more than 20 people were injured when a "crude device" was detonated on another tourist ferry there.

The crime in the Bahamas isn’t nearly that of the recent Mexico incidents, and hopefully will remain that way, but the increased safety and therefore the marketability of privately managed islands seems obvious.

CocoCay’s updates should be finished by the end of next year, despite the pushback by environmentalists. If all these ship and island upgrades aren’t enough, Royal Caribbean also has five new ships currently in the works.