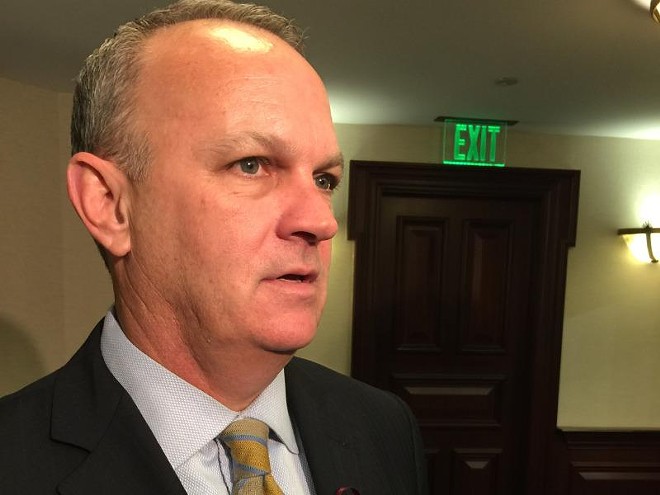 That seems to be the case with the letter Corcoran, R-Land O'Lakes, sent to the Florida Constitution Revision Commission. It’s a conveniently timed decision on his part, since we’re just days removed from the National Rifle Association calling out Corcoran for his hand in the passage of a new gun control law earlier this month.

“I am writing to express my grave concern with amendments that are inappropriate for inclusion in the state constitution,” Corcoran writes, referring to a potential amendment that would ban assault weapons, which may come up for a vote with the commission on Wednesday after CRC appointee and former Democratic state Sen. Chris Smith filed the amendment to another proposal. “The Constitution protects the right to keep and bear arms. All firearm policies flow from that fundamental right and should remain policy matters for the Legislature.”

The new gun control law – which, let us reiterate, Corcoran helped pass – raised the minimum age to buy a rifle from 18 to 21, banned bump stocks and imposed a three-day waiting period for all firearm purchases in Florida. The law also sets up what’s been labeled a “guardian” program to arm some trained teachers and provides more money for school resource officers. In addition, it creates a “risk protection order” allowing authorities to seize firearms of those who are mentally ill or who are deemed a threat to themselves or others with a court order.

The measure was passed in light of the tragedy that took the lives of 14 students and three faculty members at Marjory Stoneman Douglas High School in Parkland on Feb. 14.

Gov. Rick Scott, who's long known for being an NRA stooge, even signed the measure into law, setting the stage for the first major break between the Florida GOP and NRA in two decades.

Following the passage of the state’s latest gun control measure, the NRA filed a federal lawsuit, claiming the law violates the constitutional rights of 18- to 20-year-olds by not allowing them to purchase firearms.

On Monday, NRA lobbyist Marion Hammer sent an alert to the organization’s members. In it, she writes of how Corcoran is a traitor to gun-toting nuts everywhere: “Corcoran tried to justify his betrayal by claiming the provision in the bill to arm school employees makes it ‘one of the greatest Second Amendment victories we’ve ever had’” because it ends “gun free zones on school campuses,” Hammer writes. “That is complete nonsense and ignores the unconstitutional gun control included in the bill.”

Yet we'd be fools to believe that Corcoran's reasoning for playing his coward-card stops there, however.

Corcoran is currently mulling over a run for governor, since Scott is term-limited. Because two other potential opponents in the upcoming Republican primary – Agricultural Commissioner Adam Putnam and U.S. Rep. Ron DeSantis – have criticized the gun control measures in the bill, Corcoran has to fall in line as well, like a good boy.

Corcoran, alongside Scott, Senate President Joe Negron and the Florida Supreme Court, helped appoint the 37-member CRC panel, which meets every 20 years to propose amendments to the Florida Constitution and has the power to place measures on the ballot for voters to consider in November. An amendment needs 60 percent of the vote if it’s to pass.

The CRC will decide on all proposals set for the ballot by May 10.