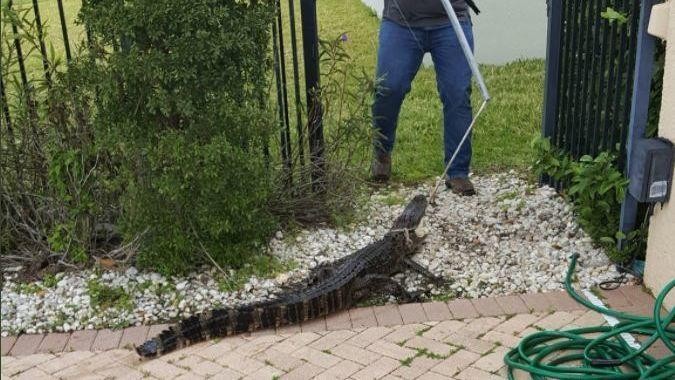 One gator's rest and relaxation time was cut short after trappers interrupted i's swim in a Lake Nona swimming pool.

The 6-foot alligator was removed from the pool on Tuesday, per Orange County Fire Rescue.

This 6 ft gator decided to enjoy the afternoon at the pool! Thank you Alligator Trappers for the safe rescue! pic.twitter.com/AgpYtOz4Mt

According to ClickOrlando.com, a homeowner reported seeing the gator chilling in their Halkyn Point pool, which is located in Lake Nona in southeast Orlando.

Firefighters called in a trapper at around 11 a.m. to capture the reptile.

After a few minutes the trapper was able to wrangle the alligator out of the water, and pull it onto a grassy area next to tape its jaw shut and subdue the legs and tail before transporting it.

Fire officials have given the gator a name, "Gabby."

According to the Florida Fish and Wildlife Conservation Commission, we are coming up on alligator mating season, which is set to start at the beginning of April. This means gators are leaving their normal habitats in search of courtship. In other words, always check your pool before jumping in.